For us, salt is a condiment we use to enhance — or sometimes to obliterate — the taste of food. Most of us eat too much of the stuff; some of us may have been told by our doctor to cut down. The proclamation, ‘You are the salt of the earth’, can resound in our ears a little ambiguous. Salt is something we like, but should have less of. So we must put our Lord’s words in context. In Antiquity, salt was not primarily about flavour. It was used, in the absence of refrigeration, to preserve food. Also, it was known to be a prerequisite for stable health. The human body cannot function without some sodium. An absence of salt leads to cramps, nausea, and dizziness. In extreme cases, it can provoke coma and thus be a cause of death. Years ago I read the remarkable story of the Russian Lykov family who, as Old Believers, fled secular society in 1936 and settled in the Khakassian taiga, as far as it is possible to get from the sea. There they formed a separate enclave in which, for decades, the lived secluded, having no contact at all with other human beings. When geologists discovered the family in the late 70s, they asked what had been the most difficult aspect of living so entirely cut off from society. The answer was immediate: lack of salt. Sodium-deprivation had impacted gravely on the solitaries’ health. In Latin, the very word for health, salus, has salt, sal, in it. Even though it is not a matter of exact etymology, the link is suggestive. The wages a person needs to live, his salary, is literally ‘saltmoney’, salt being a necessity for subsistence. In the 6th century, we are told, Moorish merchants in Africa  routinely traded salt ounce for ounce for gold.

What Christ our Lord asks of us is not just to add a little seasoning to the world, as if to render the world more palatable. Our task is to provide the world with something essential it needs to live and thrive, something without which it languishes and dies. That something is not ours; it is his, indeed it is himself, given through us. Do we hand ourselves over to him utterly so that we may become salt, that is, so that it is no longer we who live but he who lives in us? On that question depends the efficacy of our testimony and mission, as does, quite simply, our fitness for purpose. 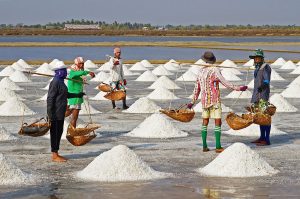