A Conversation with Heidi Marie Lindekleiv

This article appeared in Vårt Land on 4 March 2022 as part of a series in which readers are asked to present a book that is important to them. I chose to speak of the slim 1951 volume by Dom Jean-Baptiste Porion published in English under the title, The Prayer of Love and Silence. You can find my review of Porion’s letters, another wonderful book, by following this link.

Amour et silence – Love and Silence – is a small book. Only 157 pages. In a pocket edition.

– It does actually fit into a pocket! I know of few books that in such little space expresses so much that is essential, says Erik Varden, Catholic bishop of Trondheim, in Vårt Land‘s literary column ‘Religious Classics’.

We now know that the author was Jean-Baptiste Porion. When Amour et silence was first published, in 1951, the author was indicated just as ‘A Carthusian’. Varden discovered the book in the library of his English abbey, Mount Saint Bernard.

– Porion communicates a deep understanding of the Christian mystery. It is expounded unsentimentally, but with deep existential engagement. He makes it clear that the mystery is the foundation of his own life, and wishes to communicate this fact to others. He writes with crystal clarity. Not a word is superfluous. Everything means something. Everything points towards a great depth. And everything is suffused with peace, says Varden, himself an author.

Amour et silence is unlikely to be well known in Norway. The book has been translated into English, but not into any Scandinavian language. The author, born in 1899, entered the Carthusian monastery of La Valsainte, in Swiss Gruyère, aged 26. Porion lived for 35 years in Rome, serving as the Order’s procurator general, but like all Carthusians dedicated his life to silence and prayer.

– He was in every way a true monk, who lived a rigorous life, faithful to the ideals of solitude and silence. At the same time he had a remarkable gift for friendship. This lends warmth and empathy to his writings, a fact that impresses me, says Varden, who also points to a collection of letters by Porion published posthumously.

Porion corresponded with some of the time’s must distinguished intellectuals, such as Jacques Maritain and his wife Raïssa, who were dear friends.

– Maritain is an example of someone with deep concerns in both directions. I think Porion saw it as his task to anchor this discourse in the mystery. He had a lucid comprehension of movements both in secular and Church politics, but remained radically unpolitical. He endeavoured to read the signs of the times in the light of revealed and eternal values. It is impressive that he expressed this endeavour through such limpid writing. 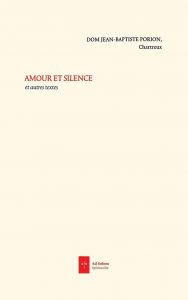 Porion was in no way intellectually inferior to his correspondents. Varden calls him an ‘unbelievably learned man’. He mastered some 14 languages, read Taoist writings in the original and translated the thirteenth-century Flemish mystic Hadewijch. Many sources feed into Amour et silence. The book is divided into two part. The first is an introduction to prayer, about opening up to God’s mystery. The second is a small collection of liturgical sermons preached to the Carthusian Brothers of La Valsainte.

Varden has read the book many times.

– It’s a volume I like to keep within reach.

– Do you notice new things in it now, things not apparent on your first reading?

– I’d say yes and no. After all, I almost know it by heart, but I see ever more what depths can be plumbed in things I’d already picked up. The older I get, the more I see the importance of reading things over again. The books that really nurture us are books we ourselves should nurture. We can easily think it’s a waste of time to re-read something. But those few books that really have something to say are inexhaustible