You can find the full text of this interview here.

You took leadership of the Territorial Prelature of Trondheim in 2020, after having resided for a long time abroad, especially in England, where Catholicism is also a minority. What is the specific reality of the Catholic Church in Norway and in your diocese?

At the risk of sounding banal, I’d say the most salient specificity is the Church’s catholicity here in the prelature. For being in a situation of extreme diaspora, we have in our midst Catholics from 130 different nations, representing a variety of rites. It is a challenge, of course, to create unity out of such diversity. But it is an interesting and beautiful challenge. I ascertain with thankfulness that there is great vitality in the Church in Trondheim, not least among the young.

How do you explain the phenomenon of the growth of Catholicism in Norway?

Growth has come about primarily through immigration — mostly from Poland and Lithuania — but there is also a steady trickle of conversions. Formerly, Catholic converts tended to come from other Christian denominations. This is still sometimes the case, but the general tendency is rather that people now find their way to the Church from a non-religious background. The discovery of the Catholic Church coincides with an awakening to faith.

A similar growth of the Catholic Church can be observed in Sweden, which is also partly explained by immigration. But there also seems to be a movement of conversion of locals because the Catholic Church in Sweden has, according to them, sunk less into progressive excesses than the Protestant churches. Consequently, there is a particular attraction for traditionalist churches and traditional liturgy, especially among young Swedes. Is this something you also witness in your country?

In 1963, when the Council Fathers approved Sacrosanctum Concilium, they stressed that the earthly liturgy should be “a foretaste of the heavenly liturgy which is celebrated in the holy city of Jerusalem, where Christ is sitting at the right hand of God.” In my experience, this is what people both young and old long for. We are called to pursue this goal with determination and humility, in the unity of the Church.

Moreover, to be a Catholic, as far as I can see, is to steer clear of excesses, be they progressive or regressive. What matters is to receive the fullness of tradition in order, with gratitude and humility, to pass it on undiminished. The noun traditio, let’s not forget, primarily indicates a dynamic process.

In times such as ours, marked by corporate amnesia, many young people naturally wish to drink deeply from the sources of the past. That is good. We are called to emulate the example of Isaac, that mysterious patriarch who spent much of his life unstopping the wells, dug by his father Abraham, which the Philistines had filled with gravel to prevent the Israelites’ flocks from thriving. But tradition no less calls on us to be prospective. A Christian is one who is in forward movement.

You have just co-signed — together with Bishops Markus Bernt Eidsvig from Oslo and Berislav Grgić from Tromsø — a letter to the Norwegian government in which you criticize the recent ban on so-called “conversion therapy” in cases of gender dysphoria in the country. You suggest in a way that under the guise of protecting certain “sexual minorities,” these policies have the effect of increasing their confusion and distress. What makes you think so?

As we pointed out in our response to the government’s proposal, we are astonished at the lack of an empirical foundation for the recent law proposal. The government’s stated intention is to protect the vulnerable; however, by wishing to ban an extraordinarily wide range of poorly defined “therapeutic” approaches, it effectively outlaws an intelligent and sensitive pastoral approach to a particular form of human distress. Also, no attempt is made to ask why the experience of gender dysphoria is rising so quickly right now and why it overwhelmingly affects young women. These facts point towards urgent questions that must be posed and, in so far as it is possible, answered.

How would you explain this personally?

I see it as one indication among many of an anthropological crisis. In the West, we have largely lost our sense of what it means to be a human being. Left without references, we furiously attempt to form ourselves in our own image, shifting and protean, sometimes with tragic consequences. This points to a great Christian task: that of spelling out the significance and orientation of human nature in biblical and Christological terms and of witnessing to our nature’s potential through sanctified lives.

Would you say that there is an anti-Christian bias in the Norwegian government?

No, but I would say there is an almost complete ignorance of a Christian view of human nature. It is astonishing how quickly Christian coordinates taken for granted just yesterday can vanish from public discourse. It is crucial, therefore, for Christians to be aware of the depths and riches contained in the Christian patrimony and to share these intelligibly with society at large. There is a tragic dearth of clear thinking in much of the public forum. As Catholics, we must set ourselves a high standard in this regard.

You were raised in the Lutheran Church. How did you become a Catholic?

By God’s grace and call. I encountered the Church, first of all, in books, attracted to its uninterrupted history and coherent theology. I then encountered her in her liturgy, which spoke to my heart; then, progressively, in the wondrous heritage of her saints — and in the dedicated commitment of specific Catholic communities.

Coming from a Cistercian monastic background, how did you experience the transition to the life of a bishop, with all that this entails, in terms of commitments to the outside world? How do you accommodate the two today?

I am still working out an existential synthesis. Fundamentally, however, the elements of life remain the same, as defined by the Benedictine vows: obedience to the grace and demands of a particular call, blessed by the Church; stability in the community, which Providence entrusts to us; conversion of life in the endeavor constantly to know, serve and love Christ better.

When you took office, you launched the website “Coram Fratribus” — in English and Norwegian — with a view to better sharing the message of the Gospel, in accordance with the call of Benedict XVI to evangelize the internet “continent.” Its creation was even reported by Vatican News, as it is not usual to see a bishop run his own evangelization portal. Have you already seen some concrete fruits of this endeavor?

I envisaged Coram Fratribus as a space of sharing and encounter. I am delighted to see that the concept seems to work. I run the website on my own, so I deliberately didn’t make it interactive: I simply wouldn’t have the resources and time otherwise. But individuals do get in touch in various ways. That is always a joy. There is much that is sinister about the internet, but there is also much that is wonderful. It’s important to use that good potential to build up communion.

What initiatives would you like to develop in the coming years within your prelature?

A core initiative is focused on preaching and teaching, to make the treasures of the faith better known. It is a great encouragement to me to see so many people eager to learn more about the faith and to encounter the mystery of faith in the liturgy, which we endeavor to celebrate in a careful and worthy way. Else I am keen to foster experiences of encounter and service. To be a member of the Church is to be a member of Christ. It is also to be a member of a community. We need to make that explicit. We are experimenting with models of priestly community, of lay communities of students and young adults, of a community of young families; I hope we shall soon be able also to realize a community of elderly people, with a view to creating a hospitable space in which generations can meet, support and enjoy one another.

What does the figure of St. Olav, famous Christian king and patron saint of Norway — who has attracted an ever-growing popular devotion these past years — inspire in you? Who are your other favorite saints?

One of the fascinating things about the story of St. Olav is that it enables us to see the progressive impact of Christ’s grace over time. Through experience, through suffering not least, his orientation becomes ever more supernatural, more given over to the Lord in faith and confidence. St. Olav reminds us that to be a Christian is to enter a process of transformation.

I have many favorite saints. Two that are especially close to me right now, whose photographs I keep above my desk, are Venerable Jérôme Lejeune, the geneticist who had such a keen sense of the irreducible value of human life, and Blessed Cardinal August von Galen, the “Lion of Münster,” who is an exceptional example of Christian courage, showing us that there are times when believers, to be true to the Lord’s call, must say, “This far, but no further.” 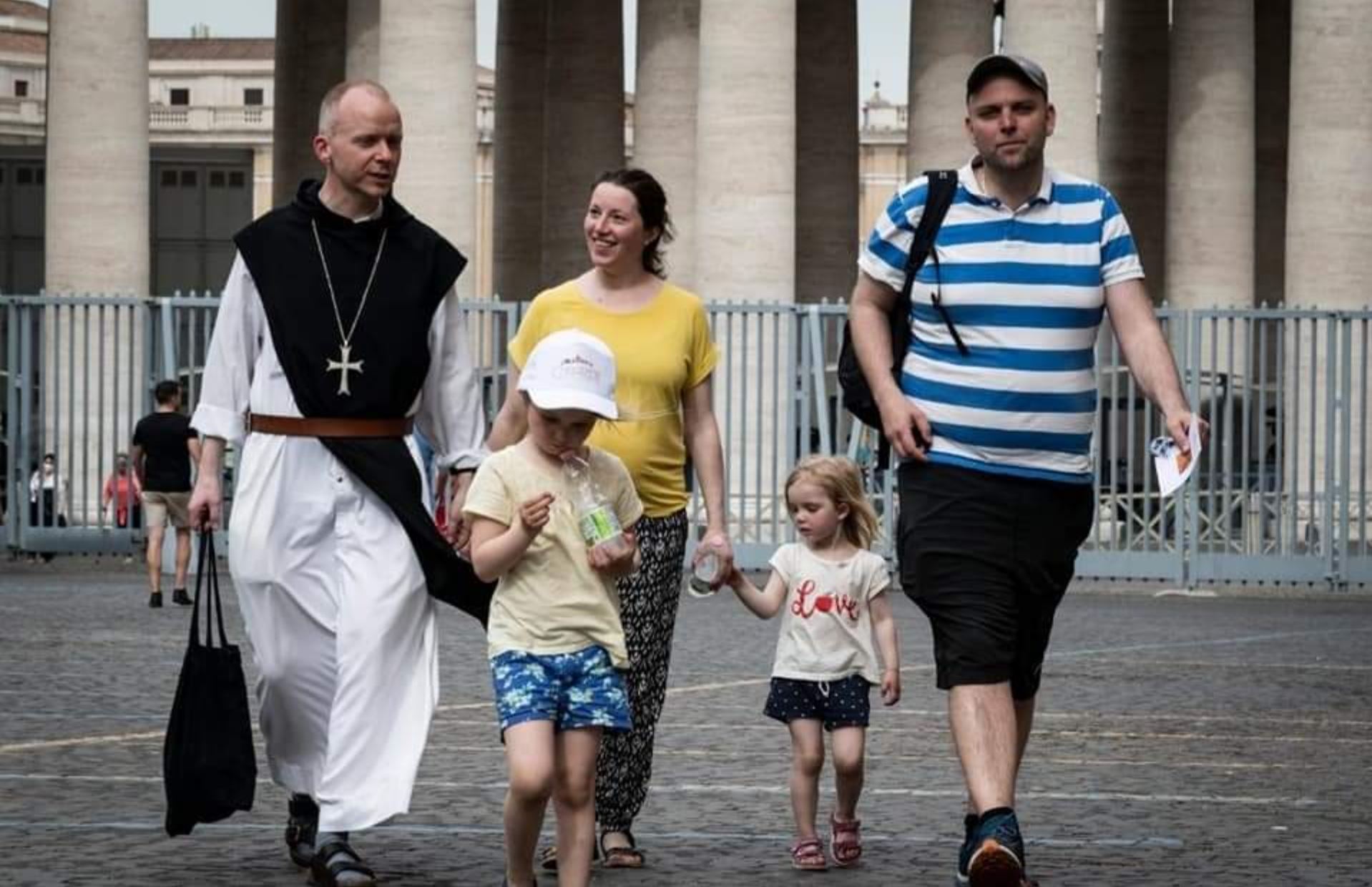 Bishop Varden accompanies a Norwegian family at the World Meeting of Families. | EWTN