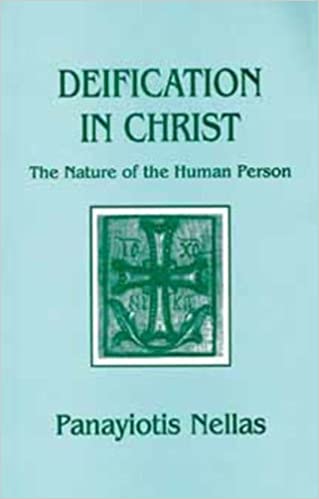 In the midst of present perplexity, with the Church weighed down by a legacy of grief, with the deconstruction of categories that, just yesterday, we thought normative, with no shortage of people who, like Isaiah’s contemporaries, ‘put darkness for light, sweet for bitter’, I find myself returning to a book that puts things in perspective. It helps me observe the Desert Fathers’ shortest, most essential dictum: ‘Look up, not down!’

Its author, the Greek theologian Panayiotis Nellas, has been described by his friend Kallistos Ware as ‘somewhat stout, with a moustache and wavy hair; by character vivacious, warm and friendly; a generous man, eager to commend and encourage others, a good listener.’ It is fitting that one who inspires such humane accolades should have left a work subtitled, ‘The Nature of the Human Person’. The main title in the original is a splendid phrase borrowed from Gregory Nazianzen: Zōon theoumenon, meaning, ‘a living creature that is being deified’. Norman Russell’s fine translation compacts this into Deification in Christ. It is, to my knowledge, the author’s only work available in English. Panayiotis Nellas, a noble specimen of humanity, died in 1986, at fifty.

The book expounds what it means to say that man was created ‘in the image’ of God. We are not to imagine God looking in the mirror, as it were, then sitting down to draw a picture of himself. The ‘image’, we are told, is archetypal. It represents purpose. ‘As the truth of an icon lies in the person it represents, so the truth of man lies in his archetype.’ What is this truth? It is the eternal Logos, the Word through whom all things were made, who envisaged the human form as one in which he could walk this earth as at first he strolled, in the cool of the day, in Eden.

We are used to affirming that ‘God became man’ and thereby assumed as his what is ours. Nellas invites us to invert the perspective. He cites Nicholas Cabasilas, a contemporary of Walter Hilton and Julian of Norwich: ‘It was for the New Man that human nature was originally created; it was for him that intellect and desire were prepared. We received rationality that we might know Christ, desire that we might run towards him. For the old Adam is not a model for the new, but the new a model for the old.’

The prospect is vertiginous. What is ‘natural’ to man is to be filled with God’s being. Mere ‘nature’ without God is ‘unnatural’. The trouble is: we forget that ‘historical reality develops within the unnatural situation in which man has found himself since the fall’, bereft of God, enclosed in himself, stripped of glory and covered in beggarly ‘garments of skin’ (Gen 3:21). God’s intention is to restore each of us ‘as a second world, a vast one within this small visible one’. We, however, are deceived into thinking that this small, visible world is all there is, and feel suffocated by it.

Nellas opens a limitless horizon. He reveals the realism inherent in the dogmas of creation, incarnation, and redemption. He shows how our natural senses may realise their divine potential, how our sense of time and space (that is, of things as they are) may be broadened to ‘create the other, equally real conditions under which prayer, the supreme work of man, can take place’, introducing us, even now, to everlasting life. The privileged setting for such new perception is the liturgy. There, past events and realities eternal become contemporary, revealing our truth to ourselves, revealing the meaning of the world we inhabit. Standing as we are on the threshold of the Paschal solemnity, conscious of so much that is in need of being put right, this insight is surely compelling?