Preface to Abbot Xavier Perrin’s book In the School of St Benedict, published by Gracewing on 11 July 2022.

A quarter of a century ago, when I was a young, somewhat anxious seeker on a vocational quest, keen to find familiar coordinates to steer by, I asked the author of this book if he thought St Benedict was a humanist. Like a good monk, he pondered the question and did not answer at once. The next day he gave a considered reply. No, he told me, he did not think the notion ‘humanist’ apt. There was too much theory attached to it. He would be more inclined to say, simply, that the Father of Western monasticism had been profoundly human. I have always been grateful for that observation.

The monastic life is life lived by supernatural criteria. At the same time it is a radically human life. Indeed, the challenge of owning oneself as oneself, of making peace, not just with humanity in general, but with oneself as a human specimen, is the first major combat a novice encounters. Anyone who has essayed it knows it can be fierce.

But what peace springs from it, what broad vistas! The realisation that it is possible to abandon pretence and embrace vulnerability, to find oneself carried by a surprising graciousness of mercy made concrete through the brethren, is freeing and joyful. One discovers what potential lies hidden in humanity, even one’s own, in all its poverty 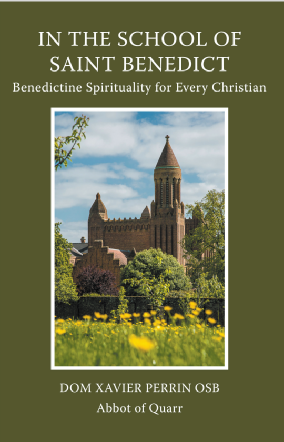 Abbot Xavier’s book presents the Benedictine way with clarity born of experience. May it open the eyes of many to the wholesome challenges and great happiness that can be found along this way.

In A Time to Keep Silence, first published in 1953, Patrick Leigh Fermor reflected on the strange pull monasticism exercised on him. It was, he wrote, ‘deeper than mere interest and curiosity, and more important than the pleasure an historian or an aesthete finds in ancient buildings and liturgy’. In this life which, at first, from afar, had seemed alien, he found something reassuring and familiar. He discovered important truths about himself.

The monastic, Benedictine heritage has precious gifts to offer a time in which many are perplexed about what it means to be human. Thank God there are, even now, trustworthy guides around to introduce this humane school of life with authority, attractively.