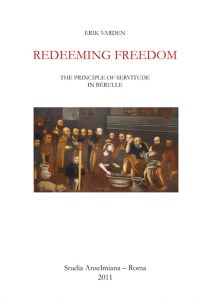 ‘It was not the ‘spirituality’ of Bérulle that first attracted me. I was intrigued, rather, by the audacity of this proverbially busy man, who donned a number of different hats, some of them ill-fitting, in order to realise a precise theological vision of man and of society. How did he set about it? How does a subjective spiritual intuition become a concrete, shareable principle of action? How did the enterprise fare? These were the questions foremost in my mind. The more I pursued them, the more I was impressed by the coherence, even heroism, of Bérulle’s life and work. Pursuing the infuriatingly idiosyncratic logic of a man who was a stranger to compromise, I came to discover a passionate heart animating what many studies had considered a disembodied theological brain. Indeed, the bias of much secondary literature became a spur. In most studies, Bérulle the theologian and spiritual master outshone Bérulle the reformer-politician, whose public work, when mentioned at all, was considered an irrelevance, if not an embarrassment. Given that nearly all Bérulle’s writings were circumstantial, intimately linked to his exercise of practical authority, this assessment seemed peculiar. Peculiar, but not strange. The vindication of Bérulle by Bremond and the subsequent mass of appreciative studies can easily make us forget that the great man’s heritage, in the eyes of his contemporaries, was largely one of failure.’ (From the Introduction).

‘For the first time, the ‘whole Bérulle’—both spiritual master and practitioner, writer and public figure—has been presented in detail, and in English.  The text is supported by a fine critical apparatus. Not only are Bérulle’s life and thought brought into new focus, but his place in the history of scholarship and in French thought more widely is indicated. […]   This study lays sound foundations on which future scholarship will rest.’ The Heythrop Journal.