Lipsey, Make Peace Before the Sun Goes Down 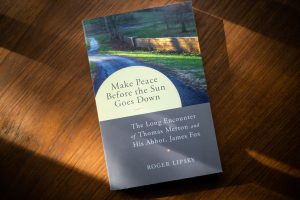 Even the mere dabbler in Mertoniana will have formed a picture of Dom James Fox, abbot of Gethsemani from 1948 to 1967. It is unlikely to be flattering. Dom James is often regarded as Merton’s nemesis, variously described as jealous, greedy, autocratic, or simply a bit daft. Roger Lipsey seeks a better understanding of the relationship between the two monks. In most respects, he succeeds.
This book is a pleasure to read. It is well-researched, elegantly written. It conveys moments of pathos without being pathetic. It is genuinely antiphonal. The two mens’ voices constantly complement each other, even when they speak at cross-purposes or engage in what is really a dialogue de sourds. With the care of a master biographer, Lipsey reconstructs the contours of a relationship that was often hurtful, leading both men to say, even do, things they would have cause to regret.
Nonetheless, we find them, at times, restored to amicable conversation, laughing together. Such moments are a relief to the reader now. They must have been then to the parties concerned. Temperamentally, Merton and Fox were vastly different, but they were vowed to the same way of life in the same human context. They were bound together by the mystery of monastic obedience. One might say they were trapped in the same cage. One might say they were gifted with each other. In a letter from 1959, Merton wrote: ‘It is, of course, Providence that has thrown the two of us together.’ This was a pondered conviction, no platitude.
Of course, there were crises: Dom James’s arrangement for Merton to see Dr Zilboorg; Merton’s machinations to transfer to other shores; the drama of M. At such times neither man shows himself at the height of his potential. The frustration of one is thrown at the other as recrimination. It is striking to find both call the other a neurotic. It reads like a statement of psychological damnation. Each time, though, they reemerge from the depths, shaken and bruised, yes, but committed to continue on the road together.
Lipsey traces these processes deftly, alert to their complexity. He does not pretend to be a disengaged observer. Once or twice he bursts into the narrative and says, ‘Look here!’ This licence does not come across as self-indulgent. It gives the work moral weight. This is a fine book, then; one I will re-read and widely recommend.
And yet—on putting it down, I felt unease. Why? Because, I suppose, it is not an impartial account. Lipsey loves Merton and gets under his skin. Dom James, meanwhile, rarely emerges into three dimensions. He remains something of a caricature, sad or ridiculous by turn, depending on the angle. Merton is surrounded by a cloud of affirming, admiring witnesses. Dom James is left standing on his own, largely surrendered to Merton’s judgement.
On p. 123, Lipsey cites Merton’s Journal from 1959. It speaks of the ‘almost universal unpopularity of Dom James’. The statement, which stands unchallenged, is weighty. Dom James remained in office for another eight years. If Merton was right, how did the community manage? Curious, I consulted a venerable monk of Gethsemani who was there, on the ground, at the time. He responded, ‘My opinion would be that Dom James was very popular in 1959’. A stark contrast of informed opinion! The Gethsemani Merton knew was exceptionally thriving. Was Dom James’s contribution really limited to pep talks, shrewdness, a good head for business, and gauche devotion? One would have liked to hear our protagonists’ recital, chorus contra chorum, supplemented by other voices.
There is also a theological undercurrent to their ‘encounter’ that Lipsey does not touch. The Rule of St Benedict addresses momentous admonitions to the abbot: he will, he is told, be held to account for the souls of the monks entrusted to his care. He is responsible for their fidelity. Time and again, when imposing restrictions, Dom James says he fears for Merton’s soul. He fears, not for nothing, that Merton will leave. We have more flexible views, these days, on the reorientation of commitment, yet to understand Fox’s actions we must enter this sacramental logic. Dom James saw himself as the guardian of particular promises Merton had made before God – no slight matter. Finally, these two monks had different views about the future of monastic life. Dom James’s vision is presented as a relic of the past, Merton’s as a new beginning.
Fifty years on, their Order largely experiences the opposite of flourishing. How does this affect our evaluation of their respective monastic legacies? There are no easy answers. But I would have loved to hear an author of Roger Lipsey’s stature put forward even tentative ones. He has written a very good book. Like most good books, it invites further questioning.