Exaltation of the Holy Cross

Historically speaking, today’s feast has a twofold reference. The Byzantine Church keeps it to recall how the Emperor Heraclius rescued the relic of the Cross from Persian invaders in the seventh century. Already 300 years earlier, however, a related feast commemorated the dedication of Jerusalem’s Sepulchre Church, in which the Cross was displayed for veneration. This earlier event was likewise based on a rescue mission; not from unbelievers but from oblivion. The story is told in many versions, but its substance is solid.

Everyone knows how the Christian faith’s fortunes changed with the conversion of Constantine, son of a veteran of Rome’s campaign in Britain. When Constantine ascended to the throne, the Church emerged from underground. It began to leave its mark, even monumentally. The age of Constantine is the age of the first Christian basilicas. The faith is suddenly visible throughout the empire.

People were anxious to see and touch proofs of the Gospel. Constantine therefore gathered relics. He built churches to house them. That is how he came up with St Peter’s in Rome, built on the Fisherman’s Tomb. The mortal remains of Apostles were wonderful and precious. But what of relics connected with Christ himself, defined by the Church as true Man and true God.

A dizzying thought: there might be material objects around that were physically touched by God Almighty!

It is small wonder that Constantine set out to search for the greatest relic of all: the Cross on which Christ died. He entrusted the mission to a formidable agent, his mother Helena. Dispatched to Jerusalem, Helena searched high and low. The Cross had been in hiding. No one knew exactly where it was. Eventually a likely find was made. But there was a difficulty. Helena found not just one cross, but three. How could she know which was the true Cross, which were crosses of mere criminals? While she weighed her option, a paralytic was brought. He was placed on the first cross. Nothing happened. He was placed on the second cross. Again, nothing. Attendants lifted him, then, onto the third. No sooner had his body touched this Cross than his lameness was healed.

God had set his seal on the saving wood. That Cross was raised up and adored. It became at once Christianity’s central relic: a talisman of power, yes; but more essentially, a concrete sign that the Gospel claim is real, that Christ did nail sin and death to the Cross, and that the Cross retains its saving power.

That is the chief message given us today. On this feast, we encounter the themes of Passiontide, but with a difference: we surround them with cries of Alleluia. When we venerate the Cross today, we give thanks for what the Cross has done for us. We rejoice in being freed, raised up, redeemed; we rejoice that Christ’s power to save is undiminished.

That said, we, too, live in times that tend to put the Cross out of view—considering it variously an irrelevance, an outrage, an embarrassment. All the more reason then, for us, now, to raise the Cross as our personal standard, to glory in it, to prove by our lives that it still heals. We do this by fundamental choices affirmed by simple gestures: by wearing a cross round our neck, perhaps; by making the sign of the cross before we eat.

In venerating the Cross, we worship God’s power, made perfect in weakness. We make an offering of our lives, that they may bear out the truth of the refrain the Church sings on Good Friday: ‘By your Cross, O Christ, joy entered the world!’ 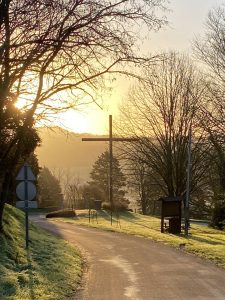