Ephesians 4:1-13: Fully mature with the fullness of Christ himself.
Matthew 9:9-13: And he got up and followed him.

In Renaissance art we sometimes find artists painting themselves into scenes they depict. Raphael included a self-portrait in The School of Athens, which takes up an entire wall in the Apostolic Palace. Michelangelo contrived to integrate a semblance of himself in the Sixtine Chapel’s Last Judgement. There can be a playful aspect to such representation, perhaps a degree of narcissism. There can also be high seriousness. The artist shows that his painting is more than a portrayal of neutral objects. He is engaged in what he paints; the motif touches his own life’s story.

It is on these terms that Matthew includes the account of his call in the Gospel he wrote. What he tells us about Christ is based on careful scrutiny of sources. It is also based on personal experience. The authority inherent in Matthew’s testimony builds on the fact that he stood up and obeyed when the Lord told him, ‘Follow me’.

I am drawn to a detail that occurs in the deposition made for the canonisation of St Dominic in 1234. Many characteristics of this loveable man are listed. As an aside, as it were in a footnotes, we learn that Dominic always carried a copy of St Matthew’s Gospel, which in any case he practically knew by heart. It is striking that he, given to combating Gnostic heresy, had chosen this particular Gospel. The revelation of Christ is so concrete and real in Matthew’s text. That is because the author had taken it seriously, had given all to live by it.

We ask ourselves often how we might communicate the Gospel to our times. It will not, I’d say, be primarily through new-fangled methodologies, reformulations, and sophisticated Apps — though such means have their uses. If we would convey the message of Christ credibly to our contemporaries, we must live by it, first of all. As St Dominic’s contemporary, St Francis, is said to have told his brethren: ‘Preach the Gospel at all times; use words when you must.’

In a period like ours, in which people for good reason shy away from rhetoric and tend to virtualise claims on their conscience, only the example of transformed lives will open ears, hearts, and minds to ‘the full knowledge of the Son of God’ which St Paul speaks of. What is at stake is an effort to help ourselves and others to grow ‘to full maturity, to the measure of the stature of the fulness of Christ’ — no less. May our lives, like Matthew’s, serve this grandiose, joy-bearing, freeing cause. 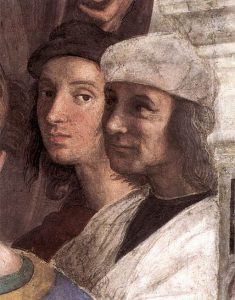 Raphael’s self-portrait in The School of Athens.