You can find a German translation of the text here.

Our first reading — a sublime confession of faith in the resurrection of the dead — is part of an account of the Maccabean revolt against Antiochus Epiphanes, who ruled the Seleucid empire from 175 to 164 BC. Hardly anyone remembers the Seleucids now. In their heyday, however, their reign reached from Bulgaria to India, covering the whole of the Near East. Antiochus was a despicable ruler. The level of his ambition can be seen from the title he assumed, ‘Epiphanes’: ‘the revealed [divinity]’. Under their breath contemporaries transcribed it as, ‘Epimanes’, that is, ‘the utterly insane’. The encounter with Israel’s religion was a shock to Antiochus. He couldn’t bear the thought of a God who challenged his political pretension to omnipotence. All traces of this God, he decided, must be obliterated. ‘It was forbidden to offer sacrifices in the temple; sabbaths and feasts should be desecrated; the temple and its servants should be rendered unclean’ (1 Mac 1:45f.).

Many gave in, but a few held firm. The Maccabean guerilla said No to the king’s demands and maintained the specificity of Israel. Thus, through opposition, Israel reached deepened insight into the Lord’s covenant and promises.

It may seem far-fetched to suggest parallels between Judas Maccabaeus and Archbishop Valkendorf, between Epiphanes and the podgy King Christian II. Analogies drawn across historical epochs are ever dubious: history does not repeat itself, thank God. Yet similarities can be perceived. Conflicts between fidelity to institutions and individuals’ conscience, between obedience owed to God and loyalty to civil government arise in any ordered society. Indeed we might say that a criterion for good societal order is this: ability to embrace such tension creatively and wisely, without recourse to violence and ostracism.

The future prelate and the heir to the throne were cronies at first. Christian became viceroy of a Norway in 1506.  Valkendorf followed him north. The two had know one another for years. Christian appointed his friend chancellor, certain that Erik was the ally he required to strengthen and glorify his reign. He wished to affirm the royal position over and against the nobility, to conquer Sweden, and to set up a trade company on the pattern he knew from the Netherlands. When Gaute, long-reigning archbishop of Nidaros, a tough old cookie, died in 1510, the viceroy rejected the cathedral chapter’s choice of a successor. Instead he appointed Valkendorf, who promptly went from being subdeacon to becoming metropolitan of a vast province that embraced not only Norway, but Iceland, Greenland, the Orkneys, and the Isle of Man.

The king gave Valkendorf a pledge that ecclesiastical privileges would be upheld, but probably assumed old friendship would provide leeway. He was wrong. Valkendorf became a sincere bishop. He took his diocese to heart, governed it wisely, and gained its affection. His broad European culture found fruitful expression. He commissioned the octagon in Nidarosdomen. He splendidly adorned the reliquary of St Olav, to the tune of 200-odd barrels of butter. Norway owes Valkendorf its first published books: the Nidaros missal and breviary, published in 1519. That same year the archbishop sent the pope a lengthy description of Finnmark, written in Latin: he thought the bishop of Rome should be acquainted with this furthest outpost of Christendom. As an appendix to the letter he sent Leo X a salted walrus-head: an example of Norwegian biodiversity.

By this time, the metropolitan’s relationship with Denmark-Norway’s king had soured. Christian’s constant fuss about money and his lacking respect for the Church’s liberties made Valkendorf cross. For his part, Christian was tired of his former friend, who no longer served his purposes.

A grotesque situation arose. First Valkendorf was accused of bringing about the death of the king’s mistress, Dyveke; next, Christian indicted him for theft. Valkendorf resolved to present his cause before the pope. He arrived in Rome at Candlemas in 1522. Jakob Ziegler, who met him then, described him as ‘a venerable old man whose clear countenance displays his honesty of soul’. Valkendorf was but 57 years old, but his labours had clearly left their mark. He never saw Norway again, but died in the city ten months later, on 28 November. His funeral was paid for by Pope Hadrian VI, an old acquaintance. He paid tribute to Valkendorf Thomas Becket-like effort ‘to maintain his Church’s liberty’.

Valkendorf was no martyr in the conventional sense. He died in his bed. But his fidelity cost him everything: health, fortune, and reputation. His courage expressed more than just natural fortitude. Freely he had let his life be configured to Christ’s cross.

A peculiar feature of the rite of Nidaros is a rubric prescribing that the priest, after the words of institution, should extend his arms ‘in the form of a cross, raised upward’. One does not stand like that day after day, year after year without one’s very soul being shaped by the gesture. We do sense a Christlikeness in Valkendorf, who had his priests pray daily for grace to be cleansed in Christ’s tears.

Life in Christ here in our fallen world involves as a matter of course a degree of persecution. That’s the way it is. Our Lord, in his preaching, made it quite clear. Our penultimate archbishop knew this, and accepted it. Further, he knew that the cause for which he fought, reached into eternity. The eternal truth of God is made manifest in time, by all means; but to adjust it to a secularised society’s expectations is irresponsible to the point of absurdity. The contemporary world must be read, rather, in the light of revealed eternity.

We are gathered today, 500 years after Valkendorf’s death, calling him our brother, recommending him as one of our own to our merciful Lord — who is the same yesterday, today, and forever. Thereby we are helped to see our own lives rightly. Daily we eat our fill at our Lord’s table. Let us, then, like Archbishop Valkendorf, live and die accordingly. 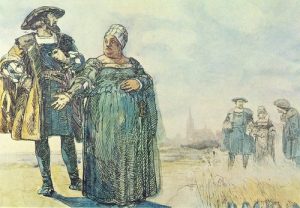 King Christian II with the formidable Sigbrit, his lover Dyveke’s mother, who has been described as his minister of finance. The historian Ludvig Daae once wrote about the king: ‘Christian II’s low and cowardly soul, which no defence can preserve from a stern judgement, was conspicuous for attracting wicked, squalid individuals and submitting to their influence.’ No wonder, then, that Erik Valkendorf was at risk. Illustration from the Danish State Archives.