The discourse from which we hear an excerpt in our first reading is one of the first catecheses of the New Testament. Peter has been called by the Spirit to visit Cornelius, an Italian officer posted to the Holy Land, favoured with a peculiar vision. Both men will have befuddled. It isn’t that long ago that Peter denied Jesus thrice, and thereafter broke down in bitter tears. Through the Book of Acts we perceive the humility which is the fruit of that fall. It informs the exercise of Peter’s task: ‘When you have been converted, affirm your brethren!’ (Lk 22:23). The apostolic witness to Christ does not spring out of thin air; it flows from the density of lived lives — lives that are complicated, the way lives tend to be, and from the experience of chains that have fallen.

Cornelius, for his part, knows that the nearest he, a heathen, can get to Israel’s people and its faith is as a ‘godfearer’, that is, as someone following suit at a distance, like the ‘promiscuous crowd’ (Exodus 12:38, Vulgate) that accompanied Jacob’s sons out of Egypt without ever being fully integrated into their covenant.

Still, the Lord has seemingly spoken directly to Cornelius, assuring him that his ‘prayers and alms have ascended as a memorial before God’. Can he still be counted among the children of Abraham?

The dispute about who is, and isn’t, among Abraham’s children introduces the Gospel. In an outburst of prophetic indignation, John the Baptist calls his hearers a ‘brood of vipers’. They are displeased, and protest: ‘We have Abraham as our father’. John tells them: ‘God could raise up these very stones and make them children of Abraham’ (Mt 3:9). This may be what is going on in Caesarea today, as Peter expounds the fulfilment of God’s promises to Cornelius.

What I want to focus on here is a particular thing Peter says. In order to describe what Jesus did, he tells his host: ‘He went about doing good, curing all who had fallen into the power of the devil’. We know several examples of sick people who were clearly possessed: the madman of Gerasa, who self-harmed (Mk 5:1-10); or the lad whom a spirit ‘through into the fire or into the water in order to destroy him’ (Mk 9:22). Still, when the Lord frees people it is generally be forgiving their sin. Indeed, he tells the paralytic lowered down through the roof that somatic illness is sometimes the outward eruption of inward ills affecting the soul. The image of captivity facing the offer of freedom gives rise to another animated exchange with the Jews. Jesus says, ‘The truth will set you free’. They retort, ‘We are Abraham’s children, and have never been anyone’s slaves.’ Jesus goes on: ‘Anyone who sins is sin’s slave; but if the Son sets you free, you will truly be free’ (8:34).

Here we are right at the heart of the Easter Gospel.

Let’s not yield to the temptation of regarding Easter as the happy ending of a film that for a while looked to end sadly. He isn’t dead after all! Those who were upset are wiping their tears! The discouraged face the future with fresh hope! We breathe a sigh of relief, put away our paper tissues, discard the left-over popcorn. Do we then carry on as normal, as if nothing had happened and everything is back to normal?

We can’t. Easter changes everything. Our chains, too, have burst. And so we face the question: How do we make use of our liberty?

Regarding the power of sin in our lives, we know we need conversion. We go to confession; we resolve to become better human beings. This is excellent, of course; but a Christian is not first and foremost a better human being; he or she is a human being made new. The opposite of sin is not virtue. The opposite of sin is freedom. The freedom Christ has won for us. Virtue is a fruit of freedom, not the other way round.

Paulus puts it all in a nutshell when he says: ‘For freedom Christ has set us free’. He continues, ‘stand fast therefore, and do not submit again to a yoke of slavery’ (Gal 5:1). Easter Sunday doesn’t mark the end of a sad story. It constitutes the beginning of a new exodus, an exodus from everything in our existence that blocks in us the life of Christ, who is for us the promised land — an exodus from addiction, from behaviour degrading to ourselves or others, from all that, despite our best intentions, is of death and of the night. In the collect we prayed that we might ‘through the renewal brought by [God’s] Spirit, rise up in the light of life’. This is why Christ fought such a fierce battle for our sakes, why he, ‘the most beautiful of the children of men’ (Psalm 45:2) let himself be so disfigured that he ‘lacked human semblance’ (Isaiah 52:14), as we read on Good Friday. The victory he won is for everyone, as Cornelius learns. May it not have been won in vain for us!

I am aways touched when we read, on Easter Morning, of the shroud our Lord left behind, and of the cloth that had been over his head, ‘rolled up in a place by itself’. It affords us an image of the Lord of Life rising up out of death with ordered peace, putting death aside, tidily folded, like a pyjamas for which he has no further need. In the same way, Brothers and Sisters, Christ enables us to leave death behind, and to enter into life. It does not have to happen with explosive gestures. The life of the Spirit in us resembles all other life and follows life’s laws: it develops organically, sometimes seemingly unnoticeably. However, growth is assured; for the grain of wheat, cast into the earth once for all, is bringing forth a generous harvest. Let us take strength from it in order to be part of it, that by our lives, lived in union with Christ’s, the world may be nourished. This is the task of our lives, fundamentally speaking; all else is circumstantial.

‘Christ our Passover has been sacrificed, therefore let us keep the feast with the unleavened bread of purity and truth’, freed to live freely in time and eternity. Amen. 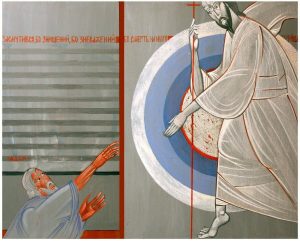 The Resurrection of Christ by the Ukrainian iconographer Ostap Lozynsky