This week, during the Bishops’ Conference, we have engaged with great questions concerning the Church, its mission and essence. The account of Christ’s transfiguration — a wonderful account — can seem like a summary of a desire nurtured by many Catholics now. In itself good and devout, it is a desire to experience Christian faith, in the Church, as light and affirming, inclusive and warm. The Gospel can seem to support such aspirations. It tells us how Jesus takes his disciples along to Tabor and appears to them in light that wraps them, too, in light. The Father’s voice is heard as a tender benediction: ‘This is my Son, the Chosen One.’ The disciples want to stay where they are, safely kept within this framework of glory. ‘Master, it is wonderful for us to be here!’

Wouldn’t it be terrific if Christian, ecclesial life could be articulated thus? Are these not the terms by which we should formulate our Catholic endeavour?

By all means, the transfiguration represents a key dimension of Christ’s revelation. We should lift up our eyes to the mountain, mindful of what Peter, James, and John were given to see on our behalf. To interpret events along the lines I have summarised (by means of gentle caricature) is, however, nonsense.

First, the light the apostles saw was a flash, an epiphanic stroke of lightning. Peter’s wish to settle within it is forthwith discounted with irony: ‘He didn’t know what he was saying.’

Secondly, the joy of Tabor expressly indicates great sorrow. The last thing Jesus says to his friends before he guides them up the mountain is that he will soon die a violent, humiliating death; and that they will be called to share his fate: ‘If anyone would come after me, let him take up his own cross daily.’ This is the condition for hearing and seeing the Lord’s glory. Moses and Elijah then appear to speak of ‘his passing which he was to accomplish in Jerusalem’. 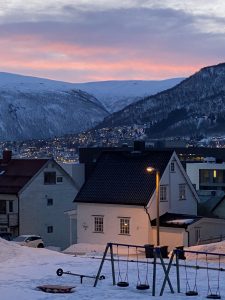 Thirdly, the light the disciples saw is not really a comforting light. To begin with, yes, it appeared thus, a light of this world, familiar and dear, like the sunrise here in Tromsø this morning, which at half past five seemed to kiss the landscape through the rising glow of pastel light.

When the light embraced them, though, it was frightening. ‘They were seized by fear’. To draw near to God, the Lord, is to be physically conscious that we and the world we know are not God. An abyss lies between our created existence and God’s uncreated being. To cross this abyss is bliss, but it hurts. We lose our grip. Photographs we have seen of astronauts floating in space, liberated from gravity, are but an inadequate illustration of the transition required of us as we pass from this world’s relative, reflected light towards him, into him, who is Light. It seems to us, paradoxically, that we’re engulfed by darkened; that we enter a cloud, to use Biblical terms.

We have, then, to be carried by Christ, who contains both worlds in himself. ‘Listen to him!’, says the voice from the cloud. What he says is: ‘Follow the path I’m staking out’, that is, the path that goes from Tabor to Calvary in order, there, through the Cross, to let this world’s pain, assumed by God made man, be revealed as glory.

‘Ein jeder Engel ist schrecklich’, says the poet Rainer Maria Rilke in a wonderful poem: ‘Every angel is terrible.’ Why? Because the angel comes as a messenger from a dimension utterly different from ours; and we tend to be frightened of what we do not know. Even Abram, who lived immersed in the mystery of God, made this experience. When the Lord, after confirming Abram’s call, consumed his sacrifice by fire — to show that what is consecrated to God must be given wholly, without holding anything back — fear came over Abram in the form of ‘a great darkness’. Out of this inner darkness he saw about him ‘a firebrand that went forth’. Abram adored. Adoring, he entered the covenant offered him by God, as a blessing for all humankind.

I’d say we moderns have to a large extent lost the ability to adore. We conceive of religion as a product of welfare that should serve purposes we define. We have, as Paul says it, ‘made our stomach into our god’. Our life of faith is played out at the level of expected well-being. If a sense of well-being is not produced, we are upset and turn away.

Can we, then, in fact be said to life a life of faith? Are we open to the absolute otherness of God, to becoming something we simply can’t imagine? We’re so anchored in what is concrete and this-worldly that we hardly think of a fundamental truth: ‘Our [real] homeland is in heaven.’ Here and now we are called to free ourselves from earthly things. Not that we should spurn the earth! It is God’s gift, exquisitely beautiful; but we have not here an abiding city.

To be human is to be prepared to set out ever anew, to learn to embrace the terrible in order, thereby, in Christ’s name, to be renewed in the core of our being, to glimpse the new heaven and the new earth towards which we’re drawn.

Today we contemplate our Lord’s transfiguration on Tabor conscious that we are, in this season of holy fasting, going up with him to Jerusalem, ‘to watch with Jesus in the night of this world and to carry his grief in our hearts’, as a fine Norwegian Lenten hymn puts it. Clearly, grief will not have the last word! Still, it is inevitable, for we inhabit a world that is wounded, sick, and full of sadness. That is why God came as our Saviour! We need the reminder, these days: To be healed, we require a remedy that lies beyond what human agency can make. Healing is given us; but we must choose to let it be effective, on our own behalf and on behalf of the whole Church.

Come, then, Lord Jesus, Light from Light. Come and save us, and lead us into your joy. Amen.