Our readings invite us to reflect on the ratio between felt need and expressed gratitude. It is a matter that touches our lives every day; it is intrinsic to any social contract, any community, any family. In the Western world, we tend to materialise need. It is part of the commercialisation of society. We tell ourselves, and are glad to be told, that there’s always something we can buy (or download) to satisfy our every need. We cast ourselves as consumers, which means we think of ourselves as being in charge. The principle holds: ‘The customer is always right.’ It is nice to be always right! As long as I look to purchase a product, and have the money to pay for it, I wield the might of capital. I can dictate terms. I don’t have to ask for things. I can order them. By indulging this habit, there’s a risk that we come to conceive of life, even of relationships, ever more in terms of transactions.

This tendency manifests itself extremely now. But it isn’t new. It is lodged in fallen human nature. Think of Naaman. An official of the king of Syria, he was smitten with leprosy. A Hebrew slave told him about Elisha, a known healer. Naaman lit up. Imagine a chronic sufferer told that nothing can be done for him at home, who then hears of a new cure in Switzerland. Of course he gets on the first plane! Naaman set off with his retinue, laden with precious gifts. He was a man of means, expecting an obsequious welcome and thorough treatment, ready to pay.

Elisha worked on different terms. He wasn’t a merchant. He was a minister of grace. When Naaman arrived, Elisha didn’t even go out to see him. He sent a message, asking Naaman to bathe in the Jordan. Naaman was furious. Couldn’t he have bathed at home?! Only the persistence of his staff made him heed Elisha’s counsel. Which worked. The leprosy left him. That is where our reading picks up the story. Naaman returns to Elisha expecting, as it were, to pay the invoice. ‘Please’, he says, ‘accept a present from your servant.’ Elisha says, ‘No thanks.’ He would have Naaman understand that his healing had been a gift.

The right response to a gift isn’t a cheque. It is thanksgiving. Saying thanks is hard for many. A person’s capacity for gratitude is a pretty infallible index of his or her inner freedom and maturity. The immature are ungrateful. They consider things due to them and kick up a fuss, or sulk, when they don’t get what they want. When they do get it, they simply feel affirmed in the rightness of their expectation. We know how tedious this attitude is in others. Do we notice it in ourselves? Where do we stand with regard to our own sense of entitlement? The question matters in a welfare society. Norway is famous for its high taxation; also for its affluence and social security. Do I think of myself as a citizen or as a client of society? A citizen has duties; a client makes claims. It is easier to be a client. The model can be transferred onto our sense of Church membership. When it makes inroads there, it can be fatal. It sours relationships, saddens hearts, kills life.

Gratitude, then, is something to be practised. It is an excellent habit to ask at the end of each day: ‘What has happened to me today that I have cause to be grateful for?’ The annoying things that have disappointed, hurt, or frustrated us recall themselves; about them we needn’t worry. The gracious things are more discreet. They need to be called forward, acknowledged, named. When they are, they release a sweetness of joy that may take us by surprise.

English happily allows us to hear (in a way Norwegian doesn’t) the mutual resonance of two key New Testament terms that form the foundation of the Christian life: I think of grace and gratitude. In both Latin and Greek the semantic link between these terms is obvious. If we try, we can verify that link experientially, too. To live by grace, to become gracious, is to learn there are things that can’t be bought, only gratefully received; to learn to say ‘thank you’ is a way of growing in grace. It is a dignified, splendid thing to be able to receive a gift freely; even as it is a dignified, splendid thing freely to give. And what a relief to step outside the consumerist paradigm, into the paradigm of grace!

In today’s Gospel a group of sick people turn to our Lord Jesus Christ for healing. All of them were healed. All were pleased to be healed. But 90% took their healing for granted, simply walking off back into the grey anonymity of ordinary, ungrateful life. One only felt the need to give thanks, filled with jubilation, ‘praising God at the top of his voice’. Such a one shows what it means to live according to the heart of God, where all is grace. Let us, too, be people with the maturity and freedom to give thanks, thereby bringing gracious, joyful warmth into a world that, surrendered to its own devices, easily turns hostile and cold. 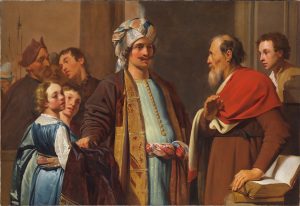 Elisha Refusing Naaman’s Gifts by Lambert Jacobsz (ca. 1598 – 1636), in the Leiden Collection. Naaman’s astonishment is well rendered. Never before has his credit card been turned down!