Recently, in the copious archives of Norway’s state broadcasting agency, I found a programme called Reflections on Doubt and Faith from 1969. Haagen Ringnes there converses with Fr Hallvard Rieber-Mohn OP, among others things about death. ‘Death’, says the Dominican, ‘is a kind of taboo in our education, our conversation, our society.’ He cites Paul Tillich, said to have said that ‘death is for the people of our time what sex was in the Victorian age: it is there, but no one talks about it.’ ‘We have’, he goes on, ‘a variety of indirect ways of ridding our lives of death, such as our frenetic worship of youth as the real time of life, to be prolonged artificially; then we have the marginalisation from society of the aged.’ He asks, ‘Can it be right to rob the full human register of the extremely valuable contribution made manifest by life’s final phase?’ There is much, here, to chew on to this day.

What really struck me, though, was the renowned preacher’s final remark:

We who lay claim to being such realists, who demand to have everything served uncensored, to know all, to try perversity and drugs and I don’t know what else – we suddenly become, when it comes to death, deeply mendacious. Death is not comme il faut. Death is not fit for polite society. Yet it is the surest thing we know about our future.

To think that one could sit and talk like that on Norwegian TV half a century ago.

I hardly think we’ve become much more truthful since then. We still pretend that death isn’t there. It is wrapped up in euphemisms. And if the truth be told, what else should people do, if they think of death as a brick wall against which they’re bound, one day, to hurl themselves?

What a task, then, is ours, yours and mine! For to us has been entrusted the message that death isn’t a wall, but an open door; that we are not, at the end of our earthly life, annihilated; that our essential self is called to immortality; that the choices we make here and now have eternal significance.

‘I am the Resurrection and the Life’, says our Lord Jesus Christ. To believe in him is to live in him, to exist on new terms. Then ‘neither things present nor things to come’ are the stuff of definitive anxiety, for we live in a blessed hope not obliged to avert its gaze from death, which instead can look death in the eye and recognise, not a faceless grim reaper, but, as St Francis put it, ‘sora nostra morte corporale’, ‘embodied death, our sister’. Death is no laughing matter, certainly; but neither is there any reason to suppress it silently. Quite the contrary.

If we ourselves lack words to speak about death, the Church, our Mother, gives us words. The prayers in our Missal’s Requiem masses are among the loveliest that exist. In addition, we have the Church’s own compositions and prayers, not least the magnificent Dies irae we have just sung. The text is ascribed to Tommaso da Celano, one of St Francis’s companions and his first biographer. Thank God it has always kept its place as a matter of course in our Norwegian Catholic Prayer Book.

If this text is looked on askance in certain quarters, it is because it speaks clearly of the judgement that awaits it. We don’t like the thought of being judged, we who’ve more or less abandoned tests even from school. What we like is to be affirmed. But should this, be the culmination of life’s mystery: the realisation that nothing ultimately matters, that good remains acknowledged, evil uncondemned?

Life, after all, is a serious business; if life goes on after death, it is only natural that we happen on seriousness there, too.

The Dies irae gives voice to natural fear. It is good to express what we’re afraid of, to confess, as we do at each Mass, that we have failed to live up to the standard to which we are held; but that we nonetheless dare to hope for mercy. The Judge before whom we shall stand is no bureaucratic official. He is just, but also merciful. He placed our burden on his shoulders, and declared, ‘I have not come to call the righteous, but sinners’. The Shepherd who awaits us at the gate is the Lamb of God.

The core of the Dies irae is not the doomsday trumpets that resound majestically in Verdi’s or Mozart’s sublime renderings. It is the two stanzas that appear right in the middle of the poem, like hinges on which the drama turns. Allow me to remind you of them:

Ah! If only our modern languages allowed such pregnant expression! We have to be content with paraphrase, but at least we should try to make it exact. The first stanza sounds like this: ‘Remember, kind Jesus, that you directed your path [to our earth] for my sake; on that day, do not lose hold of me!’ We are, each of us, permitted to pray thus; indeed, we have to pray thus if we take the Gospel seriously. For our Lord would have accomplished his work of salvation for you, for me, alone.

This insight is expressed in the second of the two central stanzas. We identify ourselves with the woman at the well in St John’s Gospel, the ostracised one who went to fetch water in the heat of midday to avoid the company of scorners. The text goes: ‘Seeking me, you sat exhausted; me you redeemed when you suffered the Cross: let not such great work be in vain!’ No, the Lord will not let that be the case. Let us, too, make sure it will not be the case.

Today we pray for all our beloved dead, and for the dead whom no one remembers. At the same time we focus our attention on the day on which we shall leave this world. None of us know whether the time we have left is long or short. What we know is that Christ’s eternal justice and mercy await us. Let us live through him, with him in such a way that, when the hour comes, we can die in him, in peace and confidence, with gratitude in our hearts. Amen. 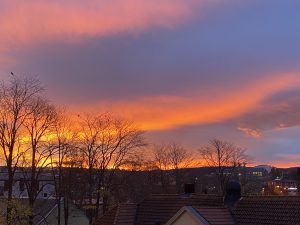 All Souls: a ray of fiery light over our lives as gloriously illumining as a November sunrise in Trondheim.