Liturgically speaking, this day marks the end of the first forty days of Paschaltide, corresponding to the forty days of Lent. The two periods are like giant waves flowing up to, then away from, Easter: ebb and flow. Easter changes everything. It makes the bitter water sweet. It stills the storm of despair. The waters that, before, threatened to drown us, carry us now. The dark abyss of death and chaos is illumined and made peaceful by Christ’s victory. Having set out with tears, we now sing songs of joy.

When Jesus first appeared to the disciples on Easter Sunday, displaying his resurrection, they were terrified, overwhelmed by emotion. The grief they had felt had created an inner tension that made them respond with disbelief, even, in Thomas’s case, with defiance. Gently, the Lord reassured them, making them see, ‘It is I’. Little by little, they got used to him again. Life seemed to continue much as before. ‘For forty days’, we are told by Luke, ‘he continued to appear to them.’ His mode of appearance was baffling, true, but nonetheless reasonably predictable. Christ continued to go in and out among them. He ate and drank with them. And what did he say? He continued ‘to tell them about the kingdom of God’. ‘Beginning with Moses and all the prophets, he interpreted to them in all the Scriptures the things concerning himself.’ He spoke also of the coming of the Spirit, but in the main this forty-day time was a time of consolidation, a time for remembrance, for calling to mind. The disciples were made to reflect in depth on the ancient experience of Israel, first; then on what they themselves had lived through. At ever new junctures, they came to exclaim, ‘Ah! That is what this means!’ The first forty days of Easter were a time of reassurance.

All that changes with the Ascension, on the fortieth day. What a disconcerting feast this is, even at a distance of two thousand years! Jesus had barely finished charging his own to bear witness to the ends of the earth when ‘he was lifted up, while they looked on, and a cloud took him from their sight’. With retrospect, in the light of theology, St Paul presents the Ascension as victory: ‘When he ascended to the heights, he led captivity captive.’ To the tiny, fragile Church, however, the event must have seemed different, as if Christ were taken captive, snatched away, leaving a piercing, painful void behind.

Today’s liturgy keeps the Ascension with shouts of Alleluias. The disciples greeted it with silence, staring up into heaven, perplexed, hurting once more, asking, ’What now?’ This fortieth day introduces a new dimension in the Church’s Easter faith. It calls for a widening of hearts and minds, for an explosion of categories. There are new things, now, to remember: the veiled promises of Power from on high. So far the disciples have looked back to the Passion and Rising of Christ. Now they look ahead, to the bestowal of the Spirit. The time after Ascension is marked by recollection, silence, and expectancy. Again we sense a hint of fear, as we, too, tend to be anxious before anything radically new.

The Ascension marks Christ’s going away. It is likewise a pledge of his return. ‘This same Jesus, who was taken up from you into heaven, will come in the same way as you saw him go into heaven.’ Do we think of this as much as we ought? Do we expect the Lord? Do we long for his coming? Do we beseech him to accomplish his work of redemption in our own lives and in history? It is essentials that we, as Christians, consider the universe and interpret it on the basis of the mystery we celebrate today. ‘Creation’, writes St Paul, ‘groans in birth pangs’. New life is waiting to be born. For all its loveliness, our world stands for something incomplete and temporary. We may be more aware of that today than people have ever been before. Let’s remember, then, when anxiety threatens: Christ is Alpha and Omega. He is the goal towards which all things tend. And he tells us: ‘Fear not!’

The Ascension is no abduction. It does not signify the Lord’s removal to some other place, away from us. Nor does it equip him, as it were, for infinite bilocation, enabling him to be momentarily presence in moments of emergency all around the world, like some celestial paramedic summonable by frantic calls of 999. Fist and foremost, the Ascension reveals the Lord Jesus, whom we dare to call our brother, as our God. In him ‘we live and move and have our being’. In him ‘all things were made’. These Scripture verses are no pious platitudes. They are the hermeneutical key to right understanding of reality. Christ ‘ascended far above all heavens in order that he might fill all things’. All things. That includes my life, and yours: our souls, our minds, our bodies.

The Ascension shows us Emmanuel, God with us, in his fullest realisation. During his earthly life, Jesus showed us what it means to walk with God. Today he says, ‘the journey continues’. He is with us always, even to the end of time, in the most intimate way possible, in a presence to be sealed nine days hence by the sending of the Spirit. Let us use these days to go deep, to take on board what Christ means when he says, ‘I will not leave you orphans’. He invites us to live in union with him, to love him and be loved by him, to know the transformative power of his grace. Do we make that certainty the core of our lives? Do we submit all else to it? Do we lead, as we ought, ‘a life worthy of the calling to which [we] have been called?’

‘May the eyes of your hearts be filled with light’, writes St Paul to the Ephesians, ‘that you may know what is the hope to which he has called you’. That is likewise my prayer for you and for myself. For, beloved, if we come to knowledge of that hope, we shall know and understand everything else. Then we shall have a wonderful gift to bestow on our world, a gift the world needs urgently. Amen. 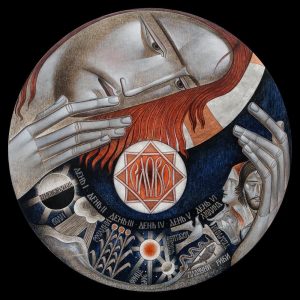 The Mystery of Christ’s Ascension ‘to where he was before’ (John 6:62) presupposes his eternal generation from the Father in the Spirit, as the creative Logos by which the world was made. Thus this icon of the ‘Creation of the World’, painted in 2019 by the Ukrainian iconographer Lyuba Yatskiv, provides visual focus for our meditation today.