Baptism of Our Lord

The feast of the Lord’s Baptism can seem – if you will permit the expression – like a liturgical cold shower. Since Christmas our attention has been directed towards the Child in the manger. We have followed him from day to day, from birth to circumcision. We are still awaiting his presentation in the Temple, for Christmas lasts, after all, until 2 February.

In the middle of that period comes today’s feast. According to the chronology of Christmas, Jesus is two weeks old, yet here he stands before us fully adult, about to assume his mature mission. Once we have celebrated the Baptism, we contemplate him again as newborn, preparing to hear Simeon’s exclamation: ‘This Child will be for the fall and rising of many!’

What’s going on? What can the Church mean by throwing us backwards and forwards in time in this way? As ever, there is a pedagogical intention. I suggest we consider it together.

The Christian mystery is one. The more we penetrate it, the better we understand it as a whole. The suckling Child in Mary’s arms is the Man of Sorrows who calls out from the Cross: ‘It is accomplished!’ The Word born in a stable while Quirinius was governor of Syria is the same Word that, at the beginning, resounded, ‘Let there be light.’ The Child to whom the Magi offer gifts is the Judge who at the end of time will separate sheep from goats.

It is hard to maintain such a broad perspective. We human beings are most at ease with things we can (or imagine we can) survey. When we think of our own lives, we focus on one minute aspect at a time, which is one reason why we often make imprudent decisions. We look at the life of our Saviour similarly. There’s no fundamental harm in doing so; though we do risk reducing him to less than he is and delimiting our response to him.

The Church, our Mother, would expand the outlook of heart towards eternity. The reign of Christ, we say in the creed, ‘will have no end.’ To thrive within it, we need to learn to tend towards endlessness. The liturgy dilates our notions. Again and again we are led to wonder at the connectedness of God’s design. We wonder in order to worship him who works it. He alone sees everything, from the beginning of creation to the end of time, as a single act, the expression of a single Word, the Word that became flesh, which for us is summarised in the name Jesus.

In order to understand how the baptism of the Lord fits into Christmas, we must remember that the feast is a prolongation of the Epiphany. Indeed, until not so long ago, the two feasts were kept as one, seen to manifest two aspects of the same reality. The revelation of Christ to the Magi represents the incorporations of the gentiles into God’s salvation, a motif proclaimed to us in Advent and at Christmas through the grandiose prophecies of Isaiah. The baptism of Christ represents the accomplishment of promises made to Israel. The Lord makes this explicit when he says to John: ‘Thus we shall fulfil all righteousness.’ In Christ humanity is united. The election of Israel appears as the preparation for the whole world’s redemption.

Jesus stands in the middle of the Jordan, the frontier that since Abraham had marked the Promised Land off from the rest of the earth, pontifically, as a bridge-builder; from now on the Gospel will reach the ends of the earth. The alabaster jar is broken open for the whole house to be filled with its aroma. What we witness on these terms is a horizontal revelation, the continuation of an historical process that makes God’s plan known to mankind and defines the relationship between peoples.

The Baptism also has a vertical aspect. It lets us see and hear who Jesus is. What we see is the Spirit descending in the shape of a dove. What we hear is the Father’s voice proclaiming, ‘You are my beloved Son.’ The mystery of the blessed Trinity is here more clearly expressed than at any other point in the Gospel.

In iconography the Baptism is presented, not primarily as a historical scene; it is depicted as Theophany, in other words, as a revelation of God himself. Time and eternity meet along a vertical axis. 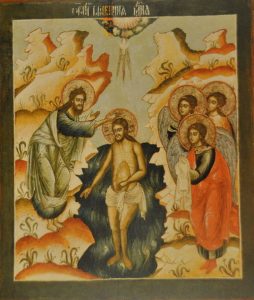 At the top of the icon we perceive a circle, the image of perfection. It indicates the Father, whose voice is made visible as rays of glory. In these rays hovers the dove, the Spirit, which in the days of Noah found the olive branch that showed the earth, having been washed clean, able once again to bear fruit for nourishment and healing. The central figure is Christ himself. He is not covered by the water. He stands on it, just as, later, he would stand on the Sea of Gennesaret, to the Twelve’s astonishment. He is the Creator enthroned upon creation. He stands there as a priest with blessing hands sanctifying the water, making it an instrument of grace for us.

In the traditional form of the icon, we find the Baptist on the left bank. He is the last and the greatest of the prophets. By putting his fingers on Christ’s head, he touches the fulfilment of Israel’s hope through countless generations. On the right bank are angels with covered hands and lowered heads, adoring. They testify that elements of earth have become expressions of the praise they sing eternally before the face of God. We remember this at Mass when, at the end of the preface, the priest affirms our communion with ‘angels and archangels, thrones and dominions’ before, in unison with them, we acclaim: ‘Holy! Holy! Holy!’ Through Christ, the kingdom of God is in our midst.

The Baptism, then, is a feast of revelation. It anchors the grace of Christ in Biblical salvation history. It manifests the Trinity of God. Israel had premonitions of this mystery; in Christ it is made clear.

The baptism of Christ is the source of our own baptism. In baptism we are born as children of God. We are, as it were, swaddled and placed in a manger. Christmas, Brothers and Sisters, tells us who God is and who we are. Let us thank God for his mercy towards us.