We are about to celebrate a series of rituals that only occur once a year. It is the bishop’s duty and privilege, on this day, to make ready the oils we use for the Church’s most intimate liturgies: first the oil of the sick, which anoints us with salvation when our health breaks down or our death approaches; then the oil of catechumens by which those who are to be baptised are freed from evil; then the chrism which neophytes receive, and which is used for confirmations, ordinations, and consecrations.

The oils are prepared in three different ways. The oil of the sick is blessed as part of the Eucharistic Prayer. The healing power of Christ springs from his sacrifice, as we sing on Good Friday: ‘By his wounds we are healed.’ The oil of catechumens is blessed at the end of Mass with a formula that recalls the baptism of Jesus, so that those who are anointed ‘courageously can assume the obligations of the Christian life.’ The chrism is not blessed, it is consecrated. The bishop breathes on the oil, mixed with precious essences, then recites a wonderful prayer of consecration, one of the loveliest texts the Church gives us to throughout the liturgical year. All gathered priests act as co-consecrators.

I would like to say a few words about this chrism, so unlike all other kinds of matter.

According to tradition, the Apostles concocted the original chrism from the oil and spices which the women had brought to Jesus’s tomb on Easter Morning. They were minded to anoint the Lord’s dead body. But they did not find him dead. He was alive! The anointing intended for his corpse became instead a vehicle by which others could know the power of his resurrection.

We are told that the Apostles, when the dispersed to the ends of the earth to proclaim the Gospel, brought along a portion of this Urchrism. This tradition was maintained with especial vigour in Alexandria, one of the Church’s oldest sees, founded by St Mark, the evangelist, on the instruction of St Peter. To this day only the patriarch of Alexandria is empowered to prepare chrism for the whole Coptic Orthodox Church. Today’s patriarch, Tawdaros, did so last year, for only the fortieth time in his Church’s bimillennial history. At each new consecration, a little of the old chrism is mixed into the new, like a liquid leaven. Thus the Copts can speak of a sacrament in material continuity with apostolic ministry.

Inclined as we are to be sceptical, we may shake our heads at such a claim. We shouldn’t. Granted, there’s hardly a scientific instrument that could demonstrate the presence of apostolic chrism in the substance used for sacred purposes today; but the theological image cannot be doubted. The same image is presupposed by our notion of the apostolic succession, which guarantees that we who act as your priests were validly ordained as ministers of the sacred mysteries for the sake of the whole Church and for its edification. Each of us can trace his ordination back, by the laying-on of hands, to the time of the apostles. The priest is not a bureaucratic official. He is a poor fellow touched by the fire of the Spirit, conveyed when a blessed man touching another man for the purpose of blessing. Think of the First Letter of John: ‘That which was from the beginning, which we have heard, which we have seen with our eyes, which we have looked upon and touched with our hands’ (1:1). The Christian revelation is no abstract idea; it is something we can handle and touch.

Touch is something fundamentally human, though surrounded, in our time, by painful ambiguity. Many transactions that formerly presupposed touch are now executed virtually. Nothing passes from hand to hand in our daily errands in the shops or at the post office. We meet only ourselves and a machine. Even visits to the doctor happen through a screen. Covid restrictions bade us not touch one another. Otherwise society has eroticised touch to an extreme degree, resulting in an anxious mixture of aggression and vulnerability. The daily news from the war against Ukraine tells of touch used to humiliate and hurt.

We need to be reminded that humanity was created on other terms. In the holy oils God gives us a palpable, sensual sign that his hand touches us tenderly, with healing, as a caress. In this way he shows us how we are to live. After our baptism, all of us were signed with holy chrism. The priest spoke our name, then proclaimed: ‘You have clothed yourself with Christ and become a new creation!’ That grace is still alive in us. Should we have lost it through sin, we can find it again through contrition and forgiveness. The innocence and chastity of touch can be discovered even by those who have known humiliations and blows, even by those who have acted against love. Grace renews us, if we allow it to work.

For those of us ordained as priests, the chrism speaks with particular force. When our hand were chrismated, it was so that they, from that day on and forever, should serve a sacred, double goal: ‘to sanctify the Christian people and to offer sacrifice to God’. This is the priestly vocation in a nutshell. The priest is appointed to be a bearer of holiness, a sacrificing presence. Above all he lays down his own life on the altar daily. Remember: the oil that sealed our priestly commission was first a sign of Jesus’s death; then it became an expression of his victory over death. Today we promise, my brothers and I, that we, by grace, will be faithful to the call God has entrusted to us. Pray for us! And pray that others will join us. The vocation of a priest is not his possession; it is a gift he receives on behalf of the whole people of God. And all of us are called to manifest to others the goodness we have received from the Lord. All of us were signed by chrism to bring, as Isaiah says, ‘good news to the poor, to bind up the hearts that are broken’. That’s an urgent task, today and at all times. 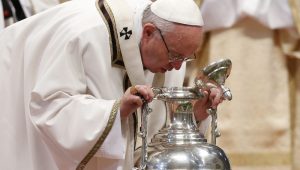 Pope Francis breathing on the Holy Chrism at the consecration in the Vatican in 2016.