It is kind of appropriate that you Bridgettines keep a feast in honour of your foundress on this day, 7 October, while the rest of the Church commemorates the Battle of Lepanto. That battle was a bulwark which protected European Christendom. St Birgitta likewise, through in different terms, was a bulwark preserving our continent from waters of chaos. It wasn’t for nothing that Pope St John Paul II named her a patron of Europe.

I’d like to set out, though, from a reference nearer to us in time, perhaps less sublime: the draft for next year’s State Budget. I got a copy of it yesterday. When the Budget speaks of support for the Church, it is with reference to our country’s National Trust. ‘Norway’, we read, ‘has a Christian cultural history embedded above all in church buildings and cemeteries around the country.’ It is terrific that that state wishes to support the upkeep of such places. We are grateful.

At the same times we must, as Christian, take note of this fact: what Christianity represents today, in the eyes of officialdom, is an antiquarian phenomenon, an historical monument.

Perhaps we sometimes feel this is the case when we consider the Church’s own life. Here in the prelature we rejoice, thank God, in a certain vitality; but the situation of Catholicism generally is not especially bright. There are sinking curves everywhere: fewer Mass-goers, fewer marriages, fewer baptisms, fewer vocations. The Church’s credibility has slumped, not without reason.

Recently I read that the diocese of Amsterdam, which used to export missionaries worldwide, wishes to close 60% of its churches within the next five years. The situation is not atypical. In addition people ask: What is going on in Germany? And in various synodal processes? Many are anxious. Some have a hard time keeping hope alive.

If pessimism overwhelms us, we’d do well to think back to the days of St Birgitta. In 1349 Birgitta arrived in Rome, then as now capital of the Universal Church. She found decay and degeneration pretty much everywhere. The poet Petrarch happened to be in the city at the same time. This is how he described it:

Houses are ruined, walls are in disrepair, churches collapse. […] The Lateran, mother of all churches, stands without a roof, exposed to the weather. The sanctuaries of Peter and Paul totter. What not long ago was the Apostles’ church is now a heap of stones apt to provoke compassion even in hearts of stone.

They could have done, back then, with a National Trust. The situation didn’t look much brighter within the crumpling walls. After the death of Clement VI in 1352, an event mysteriously followed by the incineration of the bells in St Peter’s, Birgitta received this revelation from the Lord: ‘Created things sometimes fight God’s battles and testify to God’s wrath […], thus the time of my wrath is approaching, and I shall judge the one who divided Peter’s fold.’ Birgitta received even stricter words regarding Clement’s successor, Innocent VI, to say nothing of the oracles she recorded about Magnus Eriksson, the Swedish king. She regarded him simply as a rascal.

She didn’t yield to discouragement, though. On the contrary, she energetically espoused the causes of conversion, prayer, and right living. She gave a good example. And she did more: She heeded the Lord’s call to go on pilgrimage to Jerusalem. At first she wondered whether she’d have strength for it. Then Christ spoke to her: ‘Set off, now, from Rome to Jerusalem. Why do you blame your old age? I am the Creator of nature. I can strengthen or weaken nature as it pleases me.’ Well, that was that. Birgitta set off.

All of us may feel from time to time that we haven’t strength for all that should be done; that needs far exceed our abilities and means. That is nothing to get too excited about. It is how it is to be a Christian. The harvest is great, the labourers few, and often fragile. In this way we learn what it means to live on grace; what it means that God’s power is perfected in our weakness. You and I may not need to walk on foot to Jerusalem. Still, we can do what Birgitta did.

For what the Church needs now more than anything else, I’m sure of it, is this: women and men who are fully committed to Christ; who seek to know him intimately, walking as he walked; who know and love the Scriptures, letting them set a measure for their engagement and witness in the world we inhabit. Christianity isn’t a thing of the past. It is always new, always prospective. What it requires to show its vitality is the presence of Christians who embody the Gospel effectively and credibly.

May we, Brothers and Sisters, by Christ’s grace and through St Birgitta’s intercession, be such Christians. Amen. 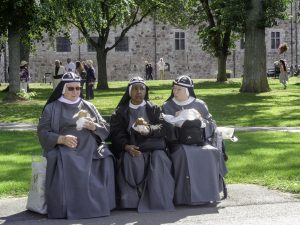 Even if one doesn’t trek to Jerusalem, one can come to Trondheim! Bridgettine nuns from Tiller having a picnic near the cathedral. Photograph: Jan Erik Kofoed.