Dear Brothers, at this Mass you renew your vows. Not that they would expire if you didn’t. You have made them, solemnly, ‘until death’. By renewing them, though, you affirm their status as a living, sacramental reality. A religious profession is more than the signing of a contract. It denotes entry into a covenant, which is a living thing. Or rather, it isn’t a thing at all; it is a relationship. As such it must be nurtured, sustained.

To enter into this covenant is to relinquish the attitude our Gospel puts before us. Instead of letting our lives be governed by designs to possess and consume, instead of living in this world with a predator’s gaze, we abandon ourselves to gratuity. God, on his part, promises to be present to us. He does not specify a given mode of revelation. We may expect him in the earthquake, wind, and fire only to discover that he isn’t there. Still, by remaining steadfast ‘on the mountain before the Lord’, which for us is the monastery of our profession, we are gradually being disposed for an encounter with the living God.

Our God is a God who delights in being known. This is a point St Benedict stresses in the prologue to his Rule. I would like to draw your attention to a particular passage that is important in this respect. It is the one which in RB 1980 reads as follows:

Let us open our eyes to the light that comes from God, and our ears to the voice from heaven that calls out this charge: If you hear his voice today, do not harden your hearts! (Prol. 9-10).

These are lovely words; yet the true splendour of the author’s intention gets lost in translation.

In St Benedict’s Latin, the first part of the text reads thus: ‘apertis oculis nostris ad deificum lumen’. The crucial term is the adjective ‘deificum’. It matters to get it right. We will be helped if we consider a parallel construction. Bear with me!

The Latin for ‘bread’ is ‘panis’. From it, a verb is derived, ‘panificere’, which means, ‘to make bread’. A ‘panifica’ in Classical Latin is a bakeress. To this day, Italians go twice daily to get fresh loaves from the local panificio, it being unthinkable to eat stale bread (i.e. from midday) at supper. As ‘panificere’ denotes a process of production, of bringing about the object named before the verbal form ‘-ficere’, which has to do with making things, ‘deificere’ means to make someone god, or, in the language of theology, to ‘divinise’ him. What St Benedict tells us to do, then, is to open our eyes to the light that would make us like God.

You will agree, I think, that this makes the passage both more interesting and more exacting. Should you wish me to corroborate my reading, we need only look to the next part of the sentence. Having told us to watch, ‘eyes opened to the divinising light’, St Benedict exhorts us to attend to God’s voice ‘attonitis auribus’. To have an ear that is ‘attonitus’ is not merely, as RB 1980 would have it, to be open-eared; it is to have ears that are thunderstruck, having heard the rumble of ‘tonitrus’.

Now, if you let your mind’s concordance run freely, where, in Scripture, do you find a coincidence of deifying light (or ‘glory’), a divine voice, and apparent thunder? The match is Jn 12:27-32, which marks the end of Christ’s last discourse before the Passover on which, ‘having loved his own who were in the world, he loved them to the end’. Let me read those verses to you:

Now my heart is troubled. And what shall I say? ‘Father, save me from this hour?’ No, for this purpose I have come to this hour. Father, glorify thy name!’ Then a voice came from heaven, ‘I have glorified it, and I will glorify it again.’ The crowd standing by heard it and said that it had thundered. Others said, ‘An angel has spoken to him’. Jesus answered, ‘This voice has come for your sake, not for mine. Now is the judgement of this world, now shall the ruler of this world be cast out; and I, when I am lifted up, shall draw all things to myself.’

These words are for you, dear monks of St Vincent, on this day on which you renew your covenant of vows. They are living words to live and love by. The fact that you stand here today, resolved to be faithful to your commitment, asking to reaffirm your undying loyalty to Christ, tells us something about the Lord’s way of ‘drawing all things to himself’.

It also reveals us something about your attentive, free response. For a man is no automaton. He is unprogrammable, possessed of that liberty to say ‘Yes’ or ‘No’ that is at once our crown of glory and our potential path to self-destruction. You have glimpsed the light. You have heard the thunder. You have known the glorious call of our crucified King. You have said, and now say again: ’Here I am!’ By that response your whole life comes to signify the glory of which Scripture speaks. You have risen from sleep to keep vigil before God on behalf of half-dozing mankind tossing and turning in throes of anguish. You have cast off darkness and put on the armour of light.

What the Lord tells you today is that this light, if you are true to it, will increasingly not just surround you, but enter and suffuse your very being. The Lord would refashion you gloriously. Not to make you other than you are—no, not at all! His will for you, for us all, is, on the contrary, to help us become what we are in truth, what we truly have it in us to become, to abandon all that’s counterfeit and false, so to stand before God and mankind integral, solid, radiant, and joyful, mature human beings recognisably made in the light-bestowing image of God.

May this divine purpose find fulfilment in your lives. May it be a source of benediction to yourselves and to all whose lives you touch. Amen. 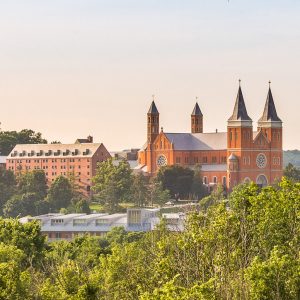 View of the basilica of St Vincent Archabbey. Here are some of the monks, accompanied by Yo-Yo Ma, singing a prayer dear to the community. It implores the intercession of the Mother of God for the grace of a blessed death.