James 5:1-5: On earth you have had a life of comfort and luxury.
Mark 9:41-50: If anyone gives you a cup of water because you belong to Christ, he will most certainly not lose his reward. 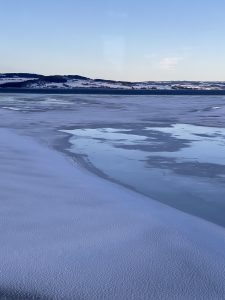 I have spent most of the day on the train from Oslo to Trondheim, immersed in the unravelling of the great drama in the Ukraine. Just north of Hamar, the train stopped alongside Lake Mjøsa at a point where it begins to narrow. There was a good amount of ice on the water. I saw the footprints of foxes. I also saw dark patches where the ice was melting. Further out, there was the rippling surface of the water. A child might still be carried by the ice some way. An adult would risk, with every movement, to step through the sheet, into the lake.

It seemed to me I saw a symbol of Europe.

In 2016, while I was abbot, I had invited a professor of politics to give our community a series of conferences on Europe. This was well ahead of Brexit, but the atmosphere in Britain was tense. Our guest expounded the issues involved from different points of view, with a scholar’s objectivity. He did not idealise the status quo. He did, however, insist time and again on a kind of meta-point which impressed me. ‘We simply do not realise’, he said, ‘how extraordinary it is that Europe should have lived for seventy years without major wars between nations.’ There was a warning implicit in this observation: we can’t take this state of affairs for granted.

Life on our continent is founded on a brittle balance that easily comes undone, with violent consequences. Today, the professor’s warning has been borne out.

With one voice, the European press calls Russia’s invasion of the Ukraine the gravest violation of another nation’s sovereignty we have seen since the Second World War. What do we do? What can we do?

I spontaneously think of a few lines by our poet Arnulf Øverland. Until quite recently, these words were firmly anchored in our collective national consciousness. Written in 1936, they voice clear-sighted premonitions of what, at that time, was about to take place:

You mustn’t sit peacefully at home
and say: ‘How sad! Poor people!’
You mustn’t, blithely, put up with injustice
just because it does not impinge on you.
With what breath remains to me, I cry out:
You can’t just walk about and forget!

This evening we have read a passage from the letter of James. There is something Øverlandian about the apostle’s tone of voice when he asks, sarcastically: ‘If a brother or sister is ill-clad and in lack of daily food, and one of you says to them, ‘Go in peace, now, keep warm and eat well,’ without giving them the things needed for the body, what good is that?’ (2:16).

What good indeed. James reminds us that we, by living undisturbed in a measure of comfort, even luxury, easily ignore the condemnation of the innocent. Not that we ourselves are down in the streets with clenched fists, shouting slogans. We may simply have closed our curtains with care, turning up the volume of the telly.

‘Have salt in yourselves’, says Our Lord, ‘and be at peace with one another.’ That does not happen automatically. To keep peace, unpeace must be confronted.

It is not my business to present a political analysis. That would go beyond the scope of both my competence and my commission. It is my business, though, to remind you that justice is a Christian imperative. There are boundaries, metaphorical and geographical, that must not be breached. One day we shall give an account for the stance we adopt in this respect.

The conflict that today has escalated into open warfare is not remote from us. Russia is our neighbour. I think, too, of our Polish brothers and sisters who for a long time have heard sabre-rattling along their Eastern border. How loud it is I heard with my own ears last September, on visiting Jabłeczna. Above all, the fate of the Ukraine pierces our hearts. Our two nations have a long and venerable shared history. When St Olav arrived to fight the battle of Stiklestad, he had set out from King Jaroslav’s court at Kyiv. The queen of Harald Hardrada, Ellisiv of Kyiv, was the daughter of Jaroslav and his Swedish Queen Ingegjerd. For us as Norwegians, the realm of Kyiv is not alien.

More than strategy is called for, now. To render possible a political vision not reducible to pragmatism, the wisdom born of grace is required. In this Mass, we call down the redemptive power of Christ Jesus on the Ukrainian people and on our beloved Europe. Let us carry this intention into our lives, too, in prayer and fasting. It is a matter, to cite our Gospel, of taking up position on the side of Life, not on that of Gehenna.

We must take this task seriously. It is serious. We’re surrounded by fragility, yes. We balance precariously on sheets of melting ice. But there is, underwater, a rock fit to carry if we choose to found our lives, our society, on it.

On the choice each one of us makes, our common future depends. Let us then choose wisely and bravely, in the name of Christ. Amen.