The story of St Agnes is at one level deeply troubling. Born into a Roman family during the reign of Diocletian, in 291, Agnes was raised a Christian in circumstances that must have born some resemblance to those described by Sienkiewicz in Quo vadis.

The story goes that her numerous, serially rejected suitors were provoked by her firm resolve to stay chaste. They denounced Agnes to the authorities for being a Christian.

Her faith was a crime. Punishment was harsh. Agnes was dragged naked through the streets of Rome to a brothel. She was thirteen! The men who attempted to abuse her were struck blind. This gave her reprieve, but not for long. She was condemned to burning at the stake. When the wood would not catch fire, an attendant killed her with a sword.

Agnes was buried in the catacombs on the Via Nomentana. A cult developed. The emperor Constantine’s leprous daughter was reputedly cured after praying at Agnes’s tomb.

In raising Agnes to the altars, the Church recognised an example of heroic virtue, all the more striking for being manifest in one so young.

There is more to the story, however. If the early Virgin Martyrs caught the Christian imagination so powerfully, it was because they were seen as symbols of the Church, Christ’s spotless Virgin Bride exposed to the fury of the ancient dragon.

We are not much given to personalisations of the Church these days. This is partly because we have become deaf to the Biblical, liturgical resonance presupposed by such subtle imagery. It is a paradox, given the Vatican Council’s intention to re-ground us in Scripture and the liturgy, the liturgy being the Church’s privileged instrument for self-expression.

More fundamentally, and more gravely, we are losing the sense of the Church as subject. What do I mean by that? To explain, let me cite a phrase Romano Guardini spoke a hundred years ago, at a conference in Maria Laach: ‘A religious process of unforeseeable consequence has started: the Church is awakening in souls.’

What Guardini referred to was a growing awareness of the Church as transformative communion, a body within which Christ is mystically at work. The Fathers considered the Church to have been born on Calvary. They recognised the grace the Church embodies in the flow of blood and water that poured forth from Christ’s pierced side.

The Church generates Christ’s life in us. That is why believers have come to think of her with love as a Virgin Bride united to her Bridegroom in chaste nuptials; as a Mother who raises us, her children, to eternal life; as a Martyr bearing witness to the light in the midst of darkness periodically so thick you could cut it with a knife.

Such was the awakening Guardini perceived in 1921. It contributed to the wonderful momentum that brought about the Second Vatican Council.

And today? The Church is now mostly, in current discourse, a direct object surrendered to verbs of action whose subject is ‘we’. We no longer seek to be formed by the Church; we form it. 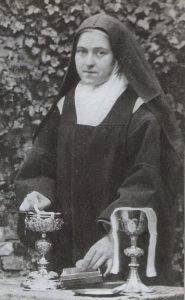 The passage from ‘she’ to ‘it’ is in itself telling. So is the fact that the word ‘church’ is often invoked without the definite article — ‘we are church’ or ‘we experience church’ — as if the notion were an abstract noun. No wonder people turn elsewhere in search of meaning and comfort. There are abstractions enough in our lives as it is.

Monks have a special mission in the task of reawakening the Church in souls as a personal, sanctifying, Christ-bearing presence. St Thérèse of Lisieux, a Doctor of the Church, summarised her life’s calling in these words: ‘In the heart of the Church, our Mother, I will be love.’ If we desire a revitalisation of Catholic life, this is where our focus for conversion must be. This is where we must invest our intelligence, our diligence, our creativity, our resolve. This is where transformation takes place, not in rhetorical flourishes liable, like chaff, to be driven away by the wind.