In 1872 the novelist Gustave Flaubert, author of Madame Bovary, completed a book he had worked on off and on for thirty years: The Temptation of St Anthony. The idea had come to him on seeing a painting by Pieter Brueghel the Elder which carried the same name. The painting is full of contorted figures half human, half animal (or even half object). There is commotion, lechery, and devilish apes. Everywhere there is a frightful chaos. In the bottom right-hand corner, before a skull placed on the ground, kneels an old man dressed like a pauper: St Anthony. 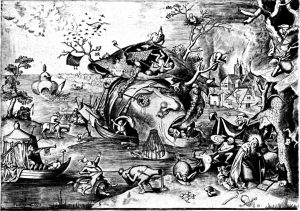 Flaubert thought the motif simply terrific. He reproduced it in words — very many words. The result is a well-nigh unreadable though exquisitely formulated yarn.

For centuries St Anthony was presented in this manner, like a tortured peasant monk in the grip of diabolical hallucinations. The source for such representation was allegedly St Athanasius’s life. How easy it is to form opinions based on books one hasn’t read!

Anyone who picks up Athanasius’s splendid text will ascertain that Anthony is indeed subject to trials in the early stages of his ascetic life, during his sojourn in the cemetery. In no way, however, is he fascinated by evil or obsessed with it.

If Athanasius shows us the extremities Anthony endured, it is for the reader’s benefit; to reassure him that, whatever might perturb his mind, heart, or conscience, St Anthony has been there first and has, by grace, emerged victorious. So there is hope for everyone.

One spiritual battle of Anthony’s was especially fierce. He fought with dark forces throughout a long night until, at dawn, a ray of light appeared and God’s presence filled his dwelling. He was mightily relieved. He was also indignant, even angry. He turned to the Lord and said curtly: ‘Where were you?! Why did you not make yourself known from the outset, to bring an end to my tribulation?’ The Lord’s answer came: ‘I was there, Anthony. But I was waiting. To see you fight.’ (VA, X.2-4)

Do we reflect sufficiently on that word from the Psalms: ‘You have prepared my hands for battle’ (Ps 144:1)?

We easily assume that what God has in store for us is sweetness, rest, and light. We may even sulk when we find we’re not given these gifts in expected abundance. Perhaps we should read the Apocalypse more, to remind ourselves of the cosmic struggle in which we are caught up, which will carry on until time ends. It impinges on our lives, not least if we are monks, honour bound to do battle peacefully under the banner of the Prince of Peace.

External disturbances tend to be for a time, then disappear, unless we invite them back in. After Anthony’s decisive display of perseverance, he was settled in a state of serene equilibrium. It was conspicuous and attractive, a source of peace to others.

One battle remains, however, a subtle one. Abba Anthony used to say, as we know from the Apophthegmata (II.2), ‘He who sits alone and is quiet has escaped from three wars: those of hearing, speaking, seeing. But there is one thing against which he must continually fight: that is, his own heart.’ He must let that heart become like Christ’s heart, contrite, pierced, and broad to the point of being capacious enough to hold both the world’s cries of pain and the Lord’s effusion of boundless, saving mercy.

God grant us such a heart. Amen.