St Gregory the Great tells us that Sts Maurus and Placid were sons of good families. St Benedict took them under his wing, seeing in them potential monks of mettle. Invariably the episode invoked to describe them is the one that took place at a lake near Subiaco. Maurus fell in. Benedict, in spirit, perceived that he was in trouble. He sent Placid to the rescue. Placid had such trust in his abbot’s order that he failed to notice a minor detail: in order to rescue his friend, he ran across water.

The story shows what obedience can do. It is edifying. It fits into a genre we know from the Desert tradition: a disciple is charged by an abba to undertake extravagant observance to test his capacity for self-transcendence.

We might ask, why did Maurus and Placid trust Benedict so? The point is not to exalt ‘blind obedience’. Blind obedience is not virtuous; it is dangerous. Obedience, to have worth, must be seeing and discerning. It presupposes trust, which must be built.

There are details in Gregory’s account that show how Abbot Benedict won the two youths’ trust. One is the incident involving a Gothic novice. The Goth was, we’re told, ‘poor in spirit’. When one day the Goth lost a tool, Maurus, who was present, expected he would be rebuked. But no. Benedict helped the young, guileless Goth retrieve what he had lost, then said to him: ‘Work on, and be sad no more!’ He was not one to break bruised reeds.

Another detail occurs in the story of Florentinus, a most unattractive fellow. A local priest, he felt threatened by Benedict and did his level best to destroy him. He tried poison, which failed. He tried undermining Benedict’s morals by sending in a bevy of dancing-girls, which also failed. Benedict, however, withdrew to another place, so as not to provoke further misdeeds. When one day news reached the monastery that Florentinus, gloating over Benedict’s departure, had suddenly died — his balcony collapsed and crushed him — Maurus rejoiced and at once sent word. ‘Hearing this’, we read in Gregory, ‘Benedict the man of God gave himself to deep lamentation, both because his enemy had been killed, and because his disciple had exulted in an enemy’s death.’ Maurus was subjected to penance. He learnt that the Lord’s command, ‘Love your enemy’, is no notional ideal but an observance to be practised.

That’s what I’d call formative experience. It leaves traces. It reveals the Gospel as a new way of living in this world, a new way of being human. By it, the boys Maurus and Placid became men, able to embody and pass on their father’s teaching, to become fathers in their turn. The feast we keep today speaks of the effective transmission of grace resulting in lives of integrity, holiness, and fruitfulness. It is a lesson we need to hear and heed right now, when the Church’s credibility worldwide is, on account of human betrayal, at an all-time low. 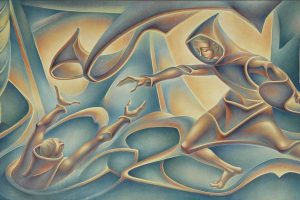 A lovely account of the scene at the lake, painted by Fr Dunstan Massey of Westminster Abbey. It effectively conveys what Maurus says he saw at the very moment he was being rescued by Placid: ‘When I was being drawn out of the water, I saw the abbot’s cowl above my head, and I thought he was pulling me out of the water’ (Dialogues II, 7.3).