The text below is my preface to the volume Hanging on in There: An Essay in Meaning. Selected Poems of Marie Noël presented and translated by Pauline Matarasso, published this day, 15 February 2022, by Cluny. 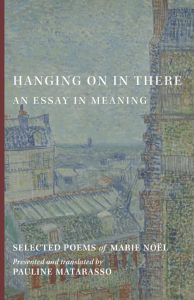 In the early summer of 1935, the Petit Palais in Paris put on a splendid exhibition of Italian art from Cimabue to Tiepolo. In retrospect we consider it a fateful time. Hitler was preparing the Nuremberg Laws, to be implemented on 15 September. A menacing front was building up in Europe. Yet still there was peace. The exhibition catalogue could acknowledge, seemingly without disingenuousness, ‘the infinitely generous gesture of Monsieur Mussolini’ that had made the display possible.

Among the visitors was a 52 year-old lady from Auxerre whose spinsterish appearance, in its studied ordinariness, was a kind of armour strategically assumed to protect, as far as possible, a soul of exquisite sensibility, that is, a supremely vulnerable soul. Her name was Marie Rouget, her nom de plume Marie Noël. She could feel in her bones the storm brewing in Europe, though for a few precious hours she forgot all about it. ‘Such a dazzling thing’, she wrote to a friend in an attempt to describe the exhibition. It had seemed to her, she went on, like a visual Te Deum. She was still in rather a daze when she stepped out of the Petit Palais and descended into the bowels of the Paris Metro. There she had this singular experience:

On the North-South line, at the entrances to two tunnels going in opposite directions, the vaults bear these indications: on one side, ‘Montparnasse’, on the other, ‘Montmartre’. On the one hand, the Mount of Apollo and the muses, of pleasures, on the other, the Mount of Martyrs, of renouncement and crosses; on the one hand, paganism, on the other, Christianity. One finds oneself on the platform. One must choose. This left me for a moment very perplexed. I should have liked to be able to go in both directions at once.

This is a shrewd self-portrait. The drama interior to the subject is made intelligible, as in the art she had just admired, by the setting in which it is drawn.

The sense of being torn apart by conflicting yet constitutional necessities had once brought Marie Noël to the edge of breakdown. On the one hand, she yearned for God with an intensity that baffled her. It drew her to leave all created things behind to seek the Lord as he is in his ineffable glory: a call to holiness. On the other hand, her vocation to poetry drew her to plumb the depth of the human condition, to consider it not merely with curiosity but with a compassion that, of its nature, withholds judgement. Would she not have to choose one to the exclusion of the other? Could she be true to herself without putting a part of herself to death?

In the throes of this dilemma, devoured by scruples, she had written, in 1918, her first letter to a Parisian priest who would guide her, until he died in 1944, towards freedom and wholeness. He enabled her to discover the range of Christ’s grace whose hallmark it is, where our mind sees only implacable opposites, to make the two one. This priest, l’abbé Arthur Mugnier, became a friend. It was to him she turned to describe that momentary paralysis on the underground platform, a particular manifestation of what remained a recurring malaise. The wise pastor responded by return of post on 23 July 1935 with customary conciseness and clarity:

Montparnasse and Montmartre! Why create opposites when the possibility of synthesis exists? Water is fire’s sister. St Francis sang the praises of both: ‘My chaste Sister Water’, then the hymn to the sun. Christ said: ‘I am Life, and have come to bring you life’, and so forth. Remain who you are without a shadow of fear.

Marie Noël needed to hear such encouragement again and again. Her battle against fear was not won in a day; it was lifelong. But she kept fighting it, determined not to leave unacknowledged, unsaid, unexposed anything she found to be real and true. Her poetry testifies gloriously to this endeavour. Rarely has literature been at the same time so embodied and so sublime. One thinks of that essential line from the Letter to the Ephesians: ‘anything exposed to the light becomes light.’

To translate Marie Noël is a formidable proposition. It presupposes not just the gift and austere discipline of poetry, but a fearlessness like that, arduously conquered, of the poet in the face of both despair and the shimmering of uncreated Fire. Perhaps only Pauline Matarasso could have done it? Anyone who reads her introduction will be struck by what struck me: it reads like the account of one who, throughout a lifetime, has lived alongside the person whose life she tells, the account of a sister or a trusted best friend. That impression of connaturality is confirmed by the poems, which remain in her English versions resplendent in their integrity. In this anthology, we hear the true voice of Marie Noël bound recklessly at once for Monmartre and Montparnasse, only to discover that, beyond what she thought was the terminus of each, the two lines meet.