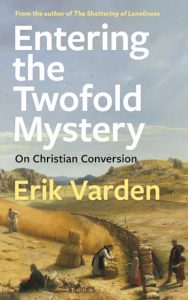 At the beginning of January, the editor of The Tablet invited me to write a brief essay to present my new book, Entering the Twofold Mystery. The essay is printed in this week’s issue. Here’s the text:

The early Cistercians were drawn to a central paradox of Christmas: that of the Verbum infans or ‘speechless Word’. Throughout salvation history, God has made ready for great redemptive deeds by preparing quiet places apart in which grace can bear fruit; but that the Father’s eternal Word, by which all things were made, should himself have become such a place was, to these contemplatives, a supreme mystery. The least inadequate response one could make, they thought, was one of silent adoration.

When, in the fullness of time, the Word broke forth in speech, it was to say: ‘Be converted!’ That is a reasonable rendering of the Synoptic Gospels’ call to metanoia (cf. Mark 1:15). It is useful to unpick the meaning of this important notion. Not only does it introduce Christ’s preaching. It underpins every other utterance he makes.

At its core we find –noia, derived from nous, which a pocket dictionary will translate by the single word ‘mind’. Never trust a pocket dictionary! If you turn to Liddell and Scott’s Greek-English Lexicon, that monument of linguistic culture, you learn that nous, in this English meaning, calls for subtle nuances. We are talking of ‘mind’ not just as an intellective faculty, but ‘as employed in perceiving and thinking, sense, wit’; ‘as employed in feeling, deciding, etc., heart’; or as deployment of ‘resolve, purpose’.

The prepositional prefix meta is used in the sense of ‘over and above’ or ‘after’. Think of metaphysics, the branch of philosophy that deals with principles beyond the calculability of the physical world — a discipline for which our empirically-functioning minds are ill prepared. Used thus in conjunction with nouns, meta– often indicates a need to let go of something or to enter a new realm. In the case of metanoia it makes demands, as we have seen, on our thinking and sensing, on our heart and will-power.

It is useful to compare metanoia with a comparable term that has made its way into current speech, namely paranoia. A paranoid person is not just one whose ideas are a bit off beam. It is someone whose existence is soaked in the unreal. Christ calls us to be metanoid in a similarly all-embracing sense. While staying rooted in the truth of our nature, we are to let ourselves be drawn into a higher degree of reality, re-reading the world about us and within us in Christ’s light. His action makes all things new: that is his promise (Revelation 21:5). To be converted is to be recreated by Christ our God.

Monasteries exist to sustain such remaking. Seeking to be converted, the monk turns determinedly from darkness to light, from falsehood to truth, from westward mirages in the desert sand to the Sun of Righteousness that rises in the East with healing in its wings (Malachi 4.2). He would make of his life a ladder like the one Jacob saw in a dream (Genesis 28.12). Singing as he ascends, he unites earth and heaven in consonance. He lives like this not just for his own sake. Within the mystery of the Church, he dares to believe that his life may, by providence, be effective balm on the wounds of the poor.

Monastic life is simply the Christian life lived single-mindedly. The monk symbolises, by his aspiration, the call of every baptised person. Many believers sense this connection viscerally. They are keen to deepen it: I ascertain this often. That is why I thought it worthwhile, in the first part of Entering the Twofold Mystery, to account for the structural elements of monasticism and to show how they are lived. For the challenge of metanoia concerns our lives as they are here and now, with their element of chaos. The Cistercian Fathers loved a line from the Vulgate text of the Song of Songs (2:4): Ordinavit in me caritatem — ‘He has put love in order in me’. For ordering to happen, I must first recognise existing disorder. Self-knowledge is the obligatory grounding for any authentic spirituality. It is, as St Teresa liked to say, ‘the bread to be eaten with every dish’.

Conversion is individually configured, yet we pursue it together. This happens above all through the liturgy. It is a pity that the liturgy is often reduced, these days, to a battlefield. We need to rediscover it, not as the sum total of our contributions, but as the choice instrument of divine intervention in our lives. The monk spends much of his day and night chanting the Divine Office. St Benedict calls it opus Dei, ‘Work of God.’ The Genitive is susceptible of a double interpretation. Liturgical prayer is work we perform for God, a plea for mercy and a sacrifice of praise. No less is it God’s work in us, realised as the living Word saturates our being in all its dimensions. Martin Buber spoke about our need to grow into a ‘Biblical consciousness’. Further, no one who has lived the monastic life for any time will doubt the body’s share in prayer through the ascesis of song, through rituals of bowing, standing, and kneeling, or simply through the physical courage required to heed the bell that calls the community to prayer at 3:15 a.m.

The early Cistercians made contributions to theology above all through liturgical sermons. I owe more than I can say to St Bernard’s Sermons for the Church’s Year. With this debt in mind, I have presumed, in the second part of the book, to present a panoramic ‘Monastic Year’. Here, conversion is considered through the prism of the liturgical cycle. The great seasons of Advent, Christmas, Lent, and Easter plunge us into the mystery of Christ. Feasts of the saints display the work of providence shaping lives of new, surprising beauty. ‘Ordinary Time’ calls on us to recognise transcendence in the midst of densely this-worldly concerns, as in the example, dear to me, of Clarissa Dickson Wright, that culinary Amazon, who once, in a state of preprandial inebriation, experienced an epiphany while scraping up boiled-over jam from a tiled kitchen floor.

Time and again in salvation history, the impetus for conversion has come from fresh engagement with the past. An emblematic example is recounted in 2 Kings 22. In the reign of Josiah, Hilkiah the priest found the Law of God in the temple. The Law! No one had given it any thought for decades. Yet there is was, making demands at once sublime and shattering. Hilkiah gave it to Shaphan the secretary, who read it to the king. ‘When the king heard the words of the book of the law, he rent his clothes.’ Countless instances of fruitful conversion have begun in this way. The Cistercian movement of the twelfth century is one example, repeated in the seventeenth under Abbot de Rancé.

What is an encumbrance to one generation, may be of great worth to the next. The abbot, says St Benedict, must bring forth from his treasury things ‘both new and old’. The treasury, then, must stay well-stocked. The Church’s patrimony is no one’s possession. No abbot, and no one generation of monks, can throw what they don’t like into a skip to have it carted away, even if this leaves them with a pleasingly empty shed. How can they know what their sons and grandsons in monastic life will need? Our shared past must ever be reread with reverence. We find in it a narrative of redemption, with ever new things to say. Totalitarian interpretations are of their nature short-lived.

‘Look to the rock from which you were cut’, proclaims Isaiah (51:1). We ought to be well equipped to follow that counsel, sailing as we are in the wake of a Council that called for a return to the sources. Yet the Council’s legacy is complex, conditioned, sometimes eclipsed, by that of the secular culture revolution, which, just as Vatican II was drawing to a close, engulfed the West. In assessing this legacy, too, metanoia is called for. We routinely confront, in the Church, not so much a clash of convictions as a clash of sensibilities. The elderly accuse the young of being retrograde. The young accuse the old of clinging to aggiornamento premised on a giorno on which the sun has long since set. This state of affairs is really rather comical, when you stop and think. Yet the conflict it represents is earnest. It is tearing us apart. That is a scandal. After decades of determined inculturation, the time has come to exculturate ourselves somewhat, to be realigned round faith’s vertical axis, to recover our sense of the timeless, to seek God’s will in listening silence, to let our lives be refashioned by grace — why, to be converted.

The Fathers and Mothers of monasticism are brilliant at putting first things first. And they have this in common: they believe in the importance of a certain rigour of outward form as a means to foster shared identity and to safeguard unity. Catholic life has become a lot more formless than it was. This may be, as is sometimes claimed, an indication of our greater freedom and maturity. It may also indicate just sloppiness. As always, trees will be judged by the kind of fruit they bear. Our forebears spoke lovingly of ‘splendour of form’. They strove to acquire, and share, a ‘form of mind’. We don’t now, on the whole. What we do speak of a lot, indeed ad nauseam, is the need for more ‘formation’ in every area of ecclesial life. But how can we form people to forms that are elastic to the point of becoming diffuse? Abbot Cuthbert Butler once commented on the celebrated ‘elasticity’ of Benedictine life. It is a ‘very good term’, he wrote, then added:

elastic, unless it is worn out, ever tends, as the pressure of [external] forces wanes, to return to its original condition, and when the forces cease to operate, it does re-assume its native form. It is in this property that elasticity lies, and that elastic differs from putty.

There is scope, I believe, for more general application of this principle. The whole Church seeks, right now, to find its centre, to renounce distraction, to consolidate unity. Entering the Twofold Mystery was written in the hope that, in this process, monastic wisdom, at once down-to-earth and supernaturally-minded, might have its tuppence’s worth to offer. Why ‘twofold mystery’? The phrase is Elsa Morante’s. In a lovely poem she speaks of conversion to the Other as being both joyful and full of pain. It cannot be otherwise for us who live in time and long for eternity. The book’s author remains, alas, far from the metanoid ideal. But he lives on what St Benedict commends at the end of the chapter of the Rule entitled, Tools for Good Works: ‘Never lose hope in God’s mercy.’