The parable of the prodigal son is among the best-known passages of Scripture. Even people otherwise innocent of Biblical culture know it and refer to it. Thanks not least to a much-read book by Henri Nouwen, Rembrandt’s painting of the son’s return, produced at the end of the artist’s long life, has come to represent a visual Gospel summary. It stands for much that all of us long for: the assurance that, however disoriented we may feel now, we shall one day return home; that someone there at home is waiting for us, listening out for our footsteps; that we may throw ourselves, on arrival, into an embrace that holds us as we are, as we have become, never mind the cuts and bruises, the stains on our clothes and holes in our shoes incurred during the course of life’s sometimes difficult journey.

There is wonderful comfort in this vision. We are right to enjoy it. At the same time we must consider it in context, asking what, in fact, it sets out to teach us. For the story, don’t forget, is not the script for a TV mini-series; it is a didactic tool employed to tell us something about the Kingdom of God. What, exactly?

The story of the prodigal son is preceded, as we have heard, by two others: they form an ensemble. The first story speaks of a man in search of a sheep, the second of a woman looking for a coin. The trinity of stories was told in response to the Pharisees’ and Scribes’ indignation that Christ socialised with people they regarded as undesirable. ‘This man welcomes sinners and eats with them,’ they grumbled, thinking he was letting down the side of righteousness, lowering standards. So Christ, by means of three vignettes, explained what he was doing.

The first two stories are short, structurally simple, easily summarised. The man had lost hold of one percent of his property; the woman of one tenth. Both sought assiduously. The image of the housewife turning her house upside-down is eloquent. We’ve all done that kind of thing. The search in either case  bears fruit, creating joy that calls out to be shared. The stories are explicitly figurative; they are not in the end about sheep or cash but, we’re told, about repentant sinners restored to communion. They are similes building up to the parable that follows.

This third story is more complex. The theme of loss is refracted differently when what is lost is not a thing or a dumb animal, but a human being who makes choices. At stake is a young man’s sense of what matters in life. He has ambitions and imperious desires. He wants to see them realised without delay, presuming, as many of us do, that he can buy fulfilment for money. He requests an advance on his inheritance (effectively saying to his dad, ‘I’d rather you were dead’) and sets off into the horizon. He finds what he was looking for; but realises, gradually, that his heart’s true yearning is set on something else. To seek to realise ourselves through pleasure can only take us thus far. Sure, our desires may be real enough, even addictive; they nonetheless touch only the surface of our lives. The human heart, meanwhile, is deep. For many of us, it takes time to discover this depth. That is why the impetuousness of youth is readily forgivable. The question is: do I, like the prodigal son, have lucidity and courage to ‘return to myself’ when one day I wake up and realise I’ve constructed my existence on a self-centred illusion?

This point is important. The young man ‘returns to himself’ and is thereby enabled to look beyond himself. Self-centredness springs from not being rooted enough in the truth of who I am. I thus need to perceive myself as the sun in a world of dazzled owls. Having lived solely for his own satisfaction, the young man wishes to dazzle no longer; he longs, now, to be seen. So he makes for home.

It matters to consider what goes on here within the framework set in the two preceding stories. They speak of a process of loss by sin through repentance to joy. In what sense is the prodigal son a sinner? We read he spent his money ‘on debauchery’, fair enough, but that’s merely the symptom. ‘Sin’ goes deeper. ‘Sin’ in the root sense is about losing one’s way, about being lost. ‘Repentance’, in Greek metanoia, stands for careful re-consideration. The metanoid woman or man takes stock of life to reorient it, letting life’s project be re-magnetised by a single, definitive desire strong enough to order lesser desires according to itself, where before these had been pulling in opposite directions. In this respect the prodigal son is an exemplar for us all. Is my heart unified? Is yours? Are our mind, soul and body attuned, or do we have the sense of being drawn asunder? Only God’s embrace fully corresponds to human yearning. Only his love can set in order our love. Sometimes we ascertain this fact through frustration, through dissatisfaction with things as they are. Such experience is painful, but also graced; implicit in it is a call. Let us hear this call and heed it, turning homeward. 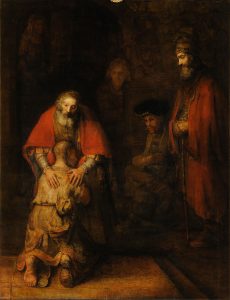