Assumption of Our Lady

The dogma of the Blessed Virgin Mary’s Assumption into heaven was defined in 1950. That doesn’t mean it’s a new dogma. On the contrary: the motif has been present in Christian thought, spirituality, and iconography since Antiquity. Renaissance painters loved to depict it. Many of you will have seen a famous canvas by El Greco, painted for the church of St Dominic in Toledo in 1577. The Virgin, radiant with youth, balances like a tightrope-walker upon a narrow half-moon. Surrounding her feet are amiable putti; above her head more ethereal angelic beings draw her upward. 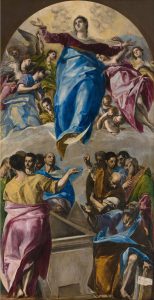 Mary extends her hands in adoration and divine astonishment. We get the impression she is saying: ‘Really, I don’t know what’s happening, but that’s of no consequence; I entrust myself to it!’ The composition is harmonious and lovely. There’s a marvellous ascendant energy in the painting, and it expresses something profoundly true. At the same time this image is misleading. The mystery appears so extraordinary and elevated that it seems to have no bearing on me and my own little life, so obviously, embarrassingly terre-à-terre.

The great message of the feast, meanwhile, is the opposite. What we admire in Mary’s Assumption into heaven is a reflection of our vocation as Christians, of a reality we hope one day to share.

When Pope Pius XII proclaimed the dogma, it was as a resounding sursum corda addressed to a world which, five years after the end of World War Two, remained shaken, suffering from still bleeding wounds, fearfully overshadowed by a menacing new world order. The Church, let’s never forget it, is our loving Mother. What she intended to do by means of the definition was to awaken hope. In his discourse in St Peter’s Square, the Holy Father spoke these luminous words:

To the many souls that are disquieted and anguished, bearing the sad legacy of our anxious, turbulent age, to souls that are oppressed but unresigned, that no longer believe in the goodness of life and only accept, as if by constraint, the present moment — to these souls the humble, unknown maiden of Nazareth, now glorious in heaven, will open the most exalted perspectives; she will comfort them and let them see to what a destiny, and to what works, she has been raised, she who, chosen by God to be the incarnate Word’s Mother, docilely received the message of the Lord.

The Assumption of the Blessed Virgin Mary can console the ailing human heart, for it concerns us intimately. What the Baptist was for our Lord, the Virgin is for us: a Forerunner. She has gone ahead to clear the path, to make out way straight.

As to how exactly this came about, the Church is discreet. We cannot know how Mary’s entry into heaven took place. The definition of the dogma simply states that ‘the Immaculate Mother of God, the ever Virgin Mary, having completed the course of her earthly life, was assumed body and soul into heavenly glory’. There is no mention, here, of the moon, the stars, and the legions of angels — those images so dear to art, derived from biblical prophecies like the one we heard as our first reading, in which the Church recognises a foreshadowing of Mary’s heavenly crowning. All this concerns interpretation and décor. The core of the dogma is essential, expressed with austere theological precision: the woman who, by anticipation, tasted the fruit of Christ’s redeeming work, who was preserved from sin and freely received the Word which became flesh in her, was not subjected to the logic of corruption. Death had no claim on her, no power over her. Thus it is natural that she was excused death and entered directly into eternal life, her full humanity intact.

What we contemplate in the Virgin’s Assumption is no eccentric exception, but the prototype of man’s calling as God intended it at first, before the seamless garment was rent by sin, with death as a consequence. The anomaly is death. The norm, according to God’s plan, was immortality. So it is healthy that our soul spontaneously regards death with revulsion, that the thought of death inspires indignation — this is right and just. Death is a scandal. We shouldn’t get used to it. The good news is that the scandal, thanks to Christ’s resurrection from the dead, has lost its sting. Before Christ’s victory, death was like a brick wall that rose at the end of human existence with no way round. Now, in Christ, death stands for a transition. The Lord’s Paschal sacrifice has opened a door in the wall. The door leads into life. The Virgin went through it first. She left it open, so that we can follow in her footsteps.

Of course, she was immaculate, we are not. That’s the way it is; we must accept it realistically. However, our stains have been cleansed in the Blood of the Lamb. We have no need to fear; the reason for our shame has been healed. What we must learn is to live trustfully and patiently, following the Blessed Virgin Mary’s example. Her life is proof that what ‘the humble, unknown maiden of Nazareth’ once sang has been realised: God does cast the mighty from their thrones and exalts the humble. He sends empty away the proudest and most cold-blooded of our foes, death itself. Christ has trampled it underfoot.

The poet Marie Noël, gifted with visions of the height and the depth, once recorded the resonance of Eve’s lament to Adam after the fall. The naïveté of Eve’s words expresses the tragic loss she has suffered, the wound in her soul. She cries out:

‘Oh Adam, Adam! We’ve broken the round dance;
fools that we are, we have ruined God’s thread.
The chain of love has fractured in the middle
and we have fallen on the rock of this world.’

The Assumption of the Blessed Virgin Mary into heaven provides help at every level. Our foot no longer strikes against the rock; the freeing chain of love has been restored; God’s thread is once again perfect and runs, faster than the pen of any scribe, to complete redemption’s wondrous tapestry; the round dance continues.

Let us dance along, then, we who have recovered our dignity as children of God. Let us lift up our eyes towards the sign that has been made manifest in heaven. Our homeland calls to us. Our Mother awaits us there. Amen.