Our first reading, from the second part of Isaiah, speaks of the purposefulness of God’s plan. It adduces examples from the natural world that few of us would quarrel with. Water from above makes the barren earth fruitful. The benefit conferred by rain is evident. Corinne, it is true, was known to observe that the Lord might at times, in these parts, shower blessings more sparingly. But the principle stands. The natural world displays an intricate network of cause and effect that we admire more and more as our tampering threatens to distort it. One needn’t be a prophet to arrive at this conclusion, however. What Isaiah is at pains to point out is that the principle displayed, the principle of purposeful effect, obtains no less in the spiritual realm. Here, too, there is order. Here, too, there is sense. The Lord’s word, we are told, is a reliable agent. It is not a random utterance cast into a void. It has a message to convey, a task to accomplish.

In a Christian view of things, every single man or woman is a ‘word from the Lord’. Each is endowed with a unique vocation. Made in the image of God, we are all called to grow into his likeness, each in a particular, inimitable way. Each of us is the bearer of a message only we can deliver. Each of us has a facet of God-given, unrepeatable glory to reveal to the world. That is why each human life is precious, why no one on this earth is dispensable. The dignity of man is constitutional. It gives him fundamental rights. It makes him worthy of reverence. This conviction was essential to Corinne. It informed her work. It shaped her experience, not least at times of pain. So then, as we look back over her life, a life so dear to us, what is the ‘word’ we hear? What is the particular message, purposed by God, that she conveyed?

‘Come, buy wine without price!’ None of us can fail to hear that alluring summons echoed in the legacy of Corinne. Her hospitality was deservedly proverbial. Many of you, I suspect, will have come to know her as I did, twenty-two years ago, when I was swept along to one of her parties in Bailey Mews. We had seen one another before, of course, at Mass and in town, but had never really spoken; yet I was immediately treated as an habitué. I was asked to choose music from a collection that, then, consisted almost entirely of Mozart. I was sternly informed of the one unbreakable rule of the house: ‘When you open the fridge to take out a bottle of bubbly, put another one in at once!’ There was never a shortage of replacements. Corinne was a lavish host. An invitation to those with ‘no money’ was extended as a matter of course to cash-strapped undergraduates. Far from her was any notion of hospitality as a covenant of exchange. Giving was natural to her. She delighted in it, quite unconcerned that many of her guests could not hope to reciprocate her generous treatment. Scripture teaches us to recognise this attitude of hers as a reflection of the kindness of God.

The blessedness of giving found expression, too, in her professional life. Continuing a proud family tradition, she made medicine her discipline, and loved it. It was never just a career choice. Increasingly, though, she found that her heart lay, really, in teaching. Here she shone. She was patient, exacting, and humane, wanting to draw out the best in her pupils. She cared deeply for them and for the work they undertook. Her teaching, though, was not confined to the classroom. Her home was the setting for many a tutorial in which young friends, notably, found help as they prepared for their A Levels or GCSEs. Her joy in their success was great. She was pleased, quite simply, to see people grow and realise their gifts. She could be firm with others whom she felt had placed, through ignorance or indolence, their light under a bushel. 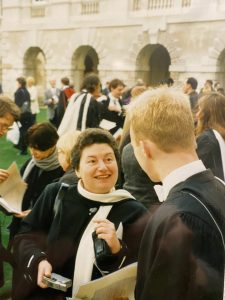 ‘Seek the Lord while he may be found’, says Isaiah. He goes on: if anyone has lost his way, let him return ‘to the Lord, that he may have mercy’. For Corinne, whose faith was all-pervasive, the divine attribute that summed up all others was precisely God’s mercy. She was sure of it, for she had known it. Her life was not always easy. Not everything turned out as she had wished. The adjustment of perspective, the reconfiguring of hope, could be costly. Yet she always found strength to go forward. How? Because at each new crossroads, after an instance of bewilderment, she found that mercy awaited her. She found that, yes, it carried her still. That this complicated world, which at times inflicts pain, is ultimately upheld by goodness: this was a certainty Corinne never lost. It never failed her. Having known mercy, she could effectively convey it. Her heart was of the kind that, in St Benedict’s phrase, is enlarged by what it suffers, and so opens. This large-hearted, kind-hearted woman was a vessel of compassion. Many have wept on her shoulder. Many have come away consoled. Empathy refined her native genius for friendship. In this role, as a friend, she truly flourished. What a gift she gave us!

‘You shall go out in joy, and be led forth in peace.’ These words of Isaiah’s were spoken in a context of exile. What would cause the hills to sing was Israel’s return to the land of God’s promise. Scripture gradually transposed this longing for home from this world to the next. Christian tradition speaks of life on this earth as an ‘exile’. This is not, of course, to say that our experience now should be spurned. Far from it! It is simply a reminder that we’re made for more than the order of creation can bestow. Our broadened hearts will tend towards the infinite. Only infinite love, a love, that is, divine, can give them what they crave. Corinne knew this. When, a day or two before she died, I asked, ‘Are you as peaceful as you look?’ she said: ‘O yes!’ She was afraid, she said, of pain – but not of death, for ‘God is good’. She spoke those words ‘with authority’, sure that the mercy that had borne her till then would lead her safely on, across the threshold. Corinne set out on the final leg of her journey home in total trust. She had followed her itinerary with relish. She had savoured its beauty and pathos. She had laughed at its quirks. Yet she, who so loved travel, never lost sight of her final destination. When it stood before her, she was fearless. She was ‘led forth in peace’. And the myrtle blooms.

‘In my Father’s house are many rooms.’ The life of Corinne bears out these words. She, so deeply Catholic, would not be at home in anything but a many-mansioned house. She incarnated a noble synthesis: she was a woman of clear principles who kept an open heart and mind. For Corinne, to be Catholic was to be generous, to reach constantly outward to the breadth and length and height and depth. Only thus, she was convinced, could she begin to know the love of Christ, which is always new and more abundant than all we ask or think. The Church she loved and served was a spacious Church. We cannot imagine her apart from it. To forego daily Mass was a sacrifice that made her grieve. She did not have to go. She wanted to. She hungered for the Bread of Life. We dare to hope that, now, she will taste it at the banquet of eternity.

At a crucial juncture in the Magic Flute, Mozart’s most mystical opera (perhaps Corinne’s favourite), the pure-hearted Tamino is launched into the unknown. He leaves everything behind that hitherto has kept and reassured him. A priest of Wisdom asks him what he seeks. ‘Friendship and love’, he replies, and we know that, for Tamino, those two were a subset of truth. Corinne’s quest has proceeded on similar terms, though for her they were more specific still. They bore a name. All her life she followed Christ. She sought his face. She died as she had lived. Death, too, she knew, is a call and a ‘word’. It does make sense, though at present we struggle to see how. ‘Yet a little while, and you will see. I live. You also will live.’ Brothers and sisters, let us draw comfort from this Gospel promise. As we approach the Lord’s table, the boundary between heaven and earth is mere gossamer. In this boundless communion, we commend our sister, our friend to him in whom she firmly placed her trust. He will not leave her desolate. Let us give thanks for what she gave us. And let us heed the word she was for us.