Alexander Schmemann once remarked that ‘two events shape the liturgy of Great and Holy Thursday: the Last Supper of Christ with His disciples, and the betrayal of Judas.’ How on earth can these scenarios be placed side by side as if they were equivalent? Had the claim not been made by one of the finest theologians of our time, we might have discarded it with a grunt of indignation. We shouldn’t, though. If we follow Schmemann’s reasoning, it will take us to the core of revelation. We shall encounter the mystery of Maundy Thursday as something alive and real, something that indicates the crucial drama of my life — and yours.

‘Jesus knew that the hour had come.’ We know the role played by the hour in Jesus’s public ministry. We meet the notion right at the outset of the Gospel, at the wedding in Cana, when Jesus says to his Mother: ‘Woman, what do you ask of me? My hour has not yet come’ (Jn 2:4). Now it has. The time that remains before his exodus from the world, by the sealing of the new covenant in his blood, is scarce. He would give those he loved firm proof that he loved them ‘to the end’.

It is a deeply human need to wish, at the moment of a definitive departure, to leave behind some sign of what those from whom we part means to us.

I think of a broadcast I heard on the BBC World Service on 5 March. In Ukraine, many men were bringing their loved ones to safety before setting out for the front. Jeremy Bowen reported from the railway station in Kyiv: ‘Fathers stood on the platforms waiting to see their families off. […] A man called Alexander sobbed as he waited for the train to leave. He’d put his wife and two small children on board. Alexander wouldn’t let go of a small toy ambulance his eight year-old son had given him as he put them on the train. He kept playing its siren. All the heartbreak of the war was on one man’s face.’ I can’t forget Alexander. The ambulance was like a sacrament of his son, probably the boy’s favourite toy. When they took leave, the child wished to leave it with his father to show that he loved him and to let his father, in his enforced physical absence, keep something of himself.

What happens in the Upper Room is similar. Jesus performs two remarkable actions. By their symbolism they speak to the intellect; by being tactile and intimate, they lodge themselves in body-memory. We are talking of actions able to convey Jesus’s presence in absentia also in times to come.

The washing of the feet speaks of humility and service; it speak, too, of vulnerability. I recently read a book by a chiropodist who reveals something interesting: that all her patients, without exception, ask forgiveness for their feet. Most of us, it would appear, are ashamed of our feet. That might explain why so many are reluctant to take part in the liturgical mandatum on Maundy Thursday. When Jesus takes the feet of the Twelve, one by one, into his hands it is to say: ‘I know you as you are, and I love you as you are‘. It is an experience none of them will have been able to forget.

At the meal, it is himself Jesus exposes. May we never cease to wonder at the wonderful thing that takes place when God gives himself into our hands, saying: ‘This is my body. This is my blood. Take, eat, and drink.’ Much could be said about the connection between this, the sacrifice of the new covenant, and the Old Testament Easter, but what I wish to highlight this evening is simply this: The Lord’s unconditional surrender. Thereby he lets the disciples sense what his love signifies. He pours it out over them, fully aware of what awaits him. ‘For he knew who was going to betray him.’

The shadow Judas casts over Jesus’s pasch becomes increasingly pronounced as Holy Week progresses. This evening it appears overwhelming. After supper, John says, Judas sneaked away from the assembly. ‘It was night’ (13;30). The darkness swallowed him up. However, ‘the Light shines in the darkness’ (1:15). Already the day before Judas had gone to the high priests and asked: ‘What will you give me if I deliver him to you?’ (Mt 26:15). He was also the one who kept the common purse (Jn 13:29). Judas, laments the Greek Church on Holy Thursday, had given himself over to φιλαργυρία, that is, the love of silver.

This is where Schmemann’s reading, to which I referred initially, shows its richness. The Orthodox theologian wrote that what matters, here, is not the detail that Judas’s particular passion was for ‘silver’:

Money stands here for all the deviated and distorted love which leads man into betraying God. It is, indeed, love stolen from God and Judas, therefore, is the Thief. When he does not love God and in God, man still loves and desires, for he was created to love and love is his nature, but it is then a dark and self-destroying passion and death is at its end. And each year, as we immerse ourselves into the unfathomable light and depth of Holy Thursday, the same decisive question is addressed to each one of us: do I respond to Christ’s love and accept it as my life, do I follow Judas into the darkness of his night?

Yes, beloved brothers and sisters, this is the choice before which we are placed. Let us choose wisely! Let us trustfully commit our feet, and with them all that of which we are ashamed, to the cleansing power of Jesus’s love; let us receive the Bread of life wholeheartedly, to live by it. Since ancient times the Church has prayed on this day: ‘Of your Mystical Supper, O Son of God, accept me today as a communicant, for I will not speak of your Mystery to your enemies, neither like Judas will I give you a kiss; but like the thief will I confess you: Remember me, O Lord, in your Kingdom.’ Amen. 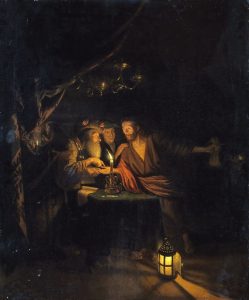 Godfree Schalken, The Betrayal of Judas (1670)