Already in the earliest times of Christian preaching, critical choices arose that said more or less this: ‘You Christians claim that Judah’s Lamb has conquered and the power of death has been trampled underfoot. But look around! Wars rage, the innocent suffer, beauty is stifled by ugliness. Friends betray friends; people once united in love hate one another. And you maintain that the kingdom of heaven is in our midst? Of all pretensions, this is surely the greatest?’

When we consider the world of today, and the state of the Church, we must admit: the question has not gone away. It calls for an answer. Let us see how our readings today may help us find one.

Our Gospel testifies to the resurrection of Christ. He who was once dead is alive, and lives for ever. Upon this conviction of historical, not symbolic nature our faith is founded. The risen one was fully human, like you and me. The fact that he emerged from death’s clutches shows that death is not life’s end, but a passage from one form of life to another.

Today we celebrate the eight day of Easter. Christians of the East, like the Jews, call Easter Pascha — a Hebrew word whose root sense is, precisely, ‘passage’. It is a word that carries deep remembrance. It points towards the first Pasch in Egypt, when Israel at last, after long captivity, was leaving Pharao’s domain. The angel of death passed over the dwellings of the Hebrews, marked with the blood of the Paschal lamb. What was then accomplished in mystery, in order that Israel might live, shows its full significance in Jesus’s Pasch. He takes death — not just his own, but death as such — on himself and explodes it from within.

An inadequate but nonetheless suggestive image may be drawn from the realm of computers. Think of a virus invading an operating system in order to render it ineffective. That is what Jesus did to death, with wholly beneficent viral force. Even though death remains for us a physical fact, it is no longer a closed system. We must suffer it, but are not its captives. In Christ, we effect our passage through it. His Pasch is ours.

In the Books of Revelation, Jesus calls himself simply ‘the living one’: ‘I was dead and now I am to live for ever and ever, and I hold the keys of seat and the underworld.’ He descended into hell. He knows the locality. No cell of the kingdom of death is alien to him.

It is impressive that the evangelists, in order to bear witness to the resurrection, expose the reality of Jesus’s death. Above all, they show us his wounds. Christian faith is realistic and matter-of-fact. Our religion is no magic. The God we belive in is no wizard.

The living God acts in life as it is. We are not obliged, first, to work out a new existence in order, then, renewed under our own steam, to find faith in him. He, the living one, is the ones who makes all things new. He sets out from what is old, from lived life, and discloses eternally salvific potential within it. That is how he lived. That is how we would teach us to live, freeing us from the chains of death.

Of course it is hard to believe this! It was hard for the apostles, too. Thomas doubted because he had known the meaning of despair. He had put his hope fully in Jesus. His devotion can be seen from an incident occurring in the story of the raising of Lazarus. When Jesus insisted, in the face of explicit threats, to go up to Jerusalem, it was Thomas who cried out: ‘Let us then go up with him, and die with him.’ No one has greater love than he who gives his life for his friends.

What grief, what rage the thought of Jesus’s wounds must have called forth in Thomas is easily imaginable. Jesus’s response is no stern correction. It’s a gentle expression of friendship. The source of despair reveals itself to be the source of hope. ‘By his wounds we have been healed’, we sing on Good Friday. Thomas experiences this and realises: what Jesus takes away is the sin of the world, not its wounds. His blood, though, flows into them and makes them clean.

As members of his mystical Body, the Church, our wounds have become his. Each wound can, through the power of Jesus, become a source of healing. We are all wounded people. That is no secret; it needn’t be a great drama. Even our most intimate wounds (wounds of wounded trust, of shame, of loneliness) can be healed through Jesus’s death-destroying Pasch. They can become glorious like his wounds — proofs from now on of his presence, we might say, of his real presence.

The Lord is at work in pain, also in the pain of our deeply wounded world. The births pangs of the new creation continue, pointing towards a clear goal. We know the way to that goal. It carries the name of a person. Whoever says that he or she belongs to him, ‘must walk as he walked’. The greatest temptation to which we are exposed today is the lethal temptation of hopelessness. Let us fight against it. Let us seek in Jesus’s wounds the meaning of the present and our orientation for the future.

Back then, in Jerusalem, shortly after the first Easter, ‘those who were ill and tormented by unclean spirits’ crowded together in the hope of being touched even by the mere shadow of the Gospel. ‘All of them were healed.’ That can happen in our days, too, through Christ, with him, and in him. Amen. 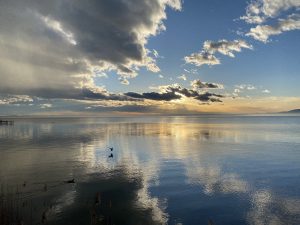