Clearly I’d read and heard the words many times, but I only began to grasp what John 12:24 meant when I read The Brothers Karamazov in my late teens. Dostoyevski set the text as an epigraph to his novel: ‘Unless a grain of wheat falls on the ground and dies, it remains alone; but if it dies, it yields a rich harvest.’

I understood that this text isn’t a devout formula that only applies to our Lord, that it speaks universal truth. In the complex structure of the novel, the image of the grain of wheat becomes a kind of master key that opens all doors. Its existential grounding becomes clearer still when you learn that Dostoyevski had the verse carved in stone on his tomb. You can read it there to this day, in the cemetery of the Alexander Nevsky Lavra in Petersburg. 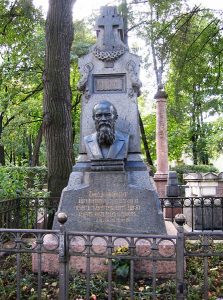 In biological terms, the parable is not exact. After all, the grain doesn’t die. Its inner potential is brought out. What dies is the husk. The kernel unfolds.

If we transfer the image to human life, the process turns into a drama. Many people aren’t aware of having a kernel; they think of themselves, like Peer Gynt, as an onion. To posit a human soul these days outside an ecclesiastical enclosure — say, in psychology — is to expose oneself to scorn. It isn’t strange, then, that the husk becomes so important to people, that they cling to it and wish to form it as they please. What else are they to do, if they think the husk is the only thing that constitutes them? In this area, we believers must keep our head cool and our heart warm.

In the optic of faith, obviously, it is clear that man finds a nourishing spring underneath the husk. I’m mixing metaphors here, and one shouldn’t, really; however I do so with evangelical sanction. The words of Jesus to Andrew and Philip in John 12 presuppose his promise to the Samaritan woman in John 4. My own vital reserves are limited; they’ll be spent; one day they’ll dry up. However, I am not reducible to my reserves. By grace I carry in me a divine potential source springing up to eternal life, eternal fellowship. This, not some Superman fantasy, is what the Gospel is about.

The grain myst be sown, buried in the earth, necessarily in solitude and darkness. As far as nature is concerned, this is traumatic. But the trauma enables supernatural growth. The admixture of natural pain and supernatural joy runs through The Brothers Karamazov. It likewise characterises the life and death of St Laurence. For the Magnificat at Vespers today, the Church gives us an antiphon which sings, ‘Beatus Laurentius dixit: Mea nox obscurum non habet, sed omnia in luce clarescunt’. That is to say, ‘Blessed Laurence said: There is no darkness in my night; all things are radiant with light.’

The legend of St Laurence depicts in detail the torture inflicted by an absolutist state. It shows that the night, materially speaking, was real and overwhelming in his martyrdom. Yet spiritual light shone through it and made the night resemble day, even investing it with cheerfulness.

When at this point I speak of ‘spiritual light’, I wish to stress that I do not use ‘spiritual’ as a synonym for ‘vague’, ‘ethereal’, or ‘subjective’. Now, this term stands for something more objectively real than the most concrete reality in human experience, which is to say, death. This reality you and I are called to know. And we are called to bear witness to it in Christ’s name. Amen. 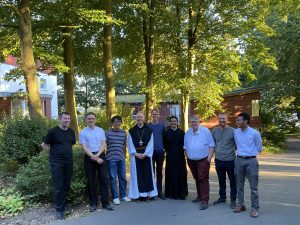 With the Norwegian participants at the AGM held in Osnabrück of Pro Scandiae populis, the association of seminarians from the Nordic countries.