The reading we have heard from Isaiah needs to be contextualised. For years the people of Israel had been submitted to Babylon’s oppressive yoke. Life under the heel of an occupying power leaves its mark. It is significant that we here in Norway now work through afresh, with seventy years’ retrospect, the experience of the Second World War, through a continuing flow of films, novels, and historical studies. Even in the third and fourth post-war generation, the occupation lives as residual remembrance. We have an idea of what it means, then, to hope for liberation. We can imagine the watchmen on the walls of Jerusalem keeping vigil expectantly. After many years without prospect, suddenly something happens. They raise their voices and shout for joy, ‘for they see the Lord face to face as he returns to Zion’.

What on earth can this mean? The book of Isaiah begins with the evocation of a vision of the Lord God. It is sublime, indicating absolute transcendence. So glorious is the Lord’s holiness that it cannot be seen. Isaiah sees only the reflection, even as he hears the echo of God’s voice. The train of the Lord’s mantle is the one thing he can grasp by way of a concrete image, rather like the haemorrhaging woman who, centuries later, pursued God’s incarnate Son with the sole hope of touching his garment — from behind. Still, later on in Isaiah, the Lord is visibly perceived, making progress towards Zion.

What the watchmen see, of course, is the people of God advancing, returning from Mesopotamian exile in order to resume the exceptional task of Israel: to build a society founded on God’s law, penetrated by his love. When God is understood to be present in this assembly, it is because it marches under a banner that proclaims, ‘God is king!’, as Isaiah puts it. The Lord has willed that his ecclesia should be a sign of his presence. Through the grace shown to Jerusalem, his holy arm will be revealed ‘in the sight of all the nations.’ ‘All the ends of the earth shall see the salvation of our God.’

At the time of Isaiah, watchmen were on the look-out for signs of God’s advent. When God did enter this world, with an immediacy the thought of which still makes us dizzy, it went unremarked: ‘He came to his own and his own received him not.’ Those who ought to have been fit to grasp who he was, did what they could to eliminate him. When we read John’s poetic prose, we must remember the concrete circumstances he refers to: the repeated attempts to stone the Lord in public, the intrigues of various hierarchies, the call of the Cross, which Jesus with mounting intensity described as ‘necessary’.

What is it about us human beings that makes us respond to blessings with curses?

Our alienation with regard to our Maker remains a mystery. It is within our possibility to become something immense, noble and beautiful! Yet we are content to stay within the limited and small, even while we carry an implicit kind of grief. An awareness of something that is unfulfilled creates a pressure within us. It is the source of recurrent pain. A beautiful verse from a traditional Norwegian song, arranged by the composer Johan Kvandal, gives expression to a pan-human lament:

Oh, one meets much that cuts joy short
that causes anxiety to throb in the heart.
How I long to move home
to him who can heal all ills.

The sense of needing healing the world cannot give is not reserved for believers. It is astonishingly common. It underpins the fascination exercised on many by death; indeed it informs the very notion of euthanasia, which would invest death with sweetness, as if annihilation were preferable to endurance of pain or to life lived with a great, apparently insurmountable desire for something that is missing.

But Christ came to us to show that this desire is not hopeless. On the contrary, the experience of needing more than life can give points to the fact that we are configured for something greater. I often think that the great tragedy of our time is that people no longer have concepts to understand and own the longing they bear. We need to return to the Word of God. It sets criteria to live, think, and long by. If only people could see how revolutionary the Bible is! Christ, we have just read in Hebrews, is ‘the radiant light of God’s glory’. He offers to give us a share of it.

He, only he, represents the plenitude our inner emptiness awaits.

Why, then, do we live as if he were not there, as if we had not received, through the Church’s sacraments, the grace that lets his life become ours? It is time to recover the profound realism of Christian hope. We must rediscover that, when Scripture says we have ‘power to become children of God’, then it is true. Only such becoming will satisfy our deepest needs. What we celebrate at Christmas is not something outside ourselves. It is a matter of our existence, of our future. Christ is our life in time and eternity. To call him anything less is to reduce the Christian message to well-intentioned but lame humanism.

‘He came to his own and his own received him not.’ It has been like that since the beginning, through the passage of time. The challenge Christ poses has never appealed to the majority. However, in each generation there have been exceptions — men and women, sometimes children, whose heart’s eyes have been opened to the transforming potential of God’s love; who have let themselves be transformed; and have thereby transformed society. The have become the pores by which grace, healing and gladdening, seeps in. You and I are called to be porous in this way, carriers into the world of Christ’s presence.

‘We have seen his glory.’ Let us then live accordingly, in neverending thankfulness. Amen. 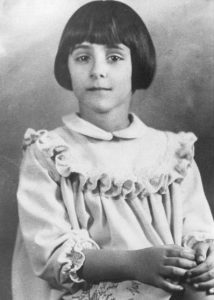 An example of one who watched prematurely on Jerusalem’s walls: Antonietta Meo (1930-37). She received First Communion at Christmas in 1936. In an audience with young people in 2007, Pope Benedict XVI said about her: ‘You can consider her a friend of yours, a model to inspire you. Her life, so simple and at the same time so grave, shows that holiness is for all ages: for children and for young people, for adults and for the elderly. Every season of our life can be a good time for deciding to love Jesus seriously and to follow him faithfully.’