On 18 March 1958, going about an errand in Louisville, Kentucky, a monk of nearby Gethsemani had an insight that nailed him to the ground. This is how he recorded it: ‘at the corner of Fourth and Walnut, in the center of the shopping district, I was suddenly overwhelmed with the realization that I loved all these people, that they were mine and I theirs, that we could not be alien to one another even though we were total strangers.’ The monk was Thomas Merton, of course. The corner of Fourth and Walnut has long been a place of pilgrimage for those who, through Merton’s writings and example, yearn to know what it is to see the world through the lens of God’s love. 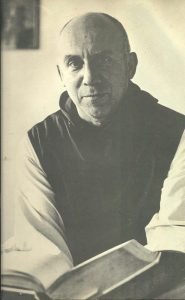 How easily we moan about God’s fugacity. How readily we have recourse to talk of the mystery of Deus absconditus and dark nights. Yet God’s providential love is the air we breathe. It is the ambience in which we live, move, and have our being. God is not absent. We are the absent ones — until suddenly we bump into him, as it were, at a street corner, as we’d run into a stranger, only to discover that it was no chance encounter; that God was waiting for us there, setting us a blessed, freeing trap.

Something of the sort happened to Dom Guéranger in Rome in the evening of 9 July 1837. That day turned out to be the culmination of months spent in the Eternal City, hoping for endorsement of his great matter: the re-establishment of Benedictine life in France. Dom Guéranger found himself in the Via delle Botteghe Oscure, just beyond the Ghetto. He wasn’t just passing. He was there by design, kneeling at a Marian shrine. Yet the coincidence of his presence right there right then and the passage, along the same street, of carriages conveying cardinals to the Quirinale, where his life’s work would be either confirmed or discarded, made the moment seem, in retrospect, a visitation.

I stress the retrospect. Sometimes it is the wing mirror that lets us perceive the burning presence of an angel that just crossed our path, a bearer of benediction. We must be attentive, then, when we’re about our business, be it ordinary or extraordinary. And we must learn, like Merton and Guéranger, to commemorate with thanks times and places in which God deigned to make himself and his will known to us, charging us, thereby, with some mission for the edification of Christ’s Body, the Church.

Today we do not merely commemorate an event that occurred 185 years ago. We affirm that our God is a God who watches over us here and now in the communion of saints, guiding his people and setting them free; that this day is for us a day of salvation.