Proverbs 2:1-9: Then you will understand the fear of the Lord.
Colossians 3:12-17: Let the word of Christ dwell in you richly.
Matthew 5:1-12: Blessed are the pure in heart, for they shall see God.

Our Father St Benedict was graced with gifts of prophecy. Not only was he, like other holy ascetics, able to read people’s hearts; he could see the present in the light of the future. His seeing is a recurrent motif in his biography, written by Gregory the Great; even as, in his Rule, St Benedict repeatedly urges us monks to learn to see, and to be seen. Two particular visions must have marked St Benedict’s consciousness especially.

The first of these he confided to a friend, a layman called Theoprobus, who one day turned up, as was his habit, to see St Benedict in his cell (Gregory, Dialogues II, 17). Theoprobus was surprised to see the normally serene, even-tempered abbot in tears. He asked what had happened. Benedict explained. He had just had a glimpse of the future which terrified him: ‘All this monastery which I have built, and everything that I have prepared for the brethren, has by the judgement of almighty God been handed over to barbarians. And I have only barely been able to obtain the concession that those who will then be living in this place will survive.’ Tradition has seen the fulfilment of this prophecy in the destruction of Monte Cassino by Lombard forces in 589, 42 years after Benedict’s death. 42 years: that’s what separates us now from Mrs Thatcher’s The Lady’s not for turning speech and the launch of Rubik’s Cube — not such a long time, really.

St Benedict, then, spent much of his life building up something he knew would soon be pulled down. Did he let this discourage him? Not a bit. His mindset was not that of a modern marketing consultant, who’d have told him to ditch futile enterprise and settle terms for early retirement to enjoy the evening of his life. St Benedict’s aim wasn’t enjoyment, not even that of building a lasting monument to something sublime. His aim was to offer each fraction of his existence as a sacrifice of praise to the Lord, sparing nothing. In such priestly worship calculation has no place: the offering must be whole, a holocaust. In our uncertain times, it is good to be recalled to this imperative.

The second crucial vision makes sense of St Benedict’s response to the first, but it came much later, perhaps by decades. The chronology matters. It lets us see that, in the meantime, our Father lived with prospects of precariousness in the darkness of faith. Only when faith had been through the crucible was it confirmed by vision. The vision occurred not long before St Benedict’s death. Night had fallen. The brethren had gone to bed. St Benedict kept vigil. He had gone to the top floor of a tower, the highest point of the monastic complex. Anyone who has been to Monte Cassino will understand this desire to move up. The abbey is placed atop a mountain in the plains of Lazio. The mountain is not very high — it rises to 516 metres above sea level — but climatic conditions produce a remarkable effect. When you step out of the abbey church in the morning, after vigils, mist still covers the landscape below. You have the exhilarating sense of being suspended in the air. Not for nothing is the piazza in front of the church called Loggia del Paradiso. At night, likewise, heaven seems close, as if the abbey were Jacob’s Ladder. On this ladder, St Benedict had climbed to the highest rung. There he stood at a window, looking out and praying, when ‘suddenly, in the dead of night, he saw that light poured from above had put to flight all night’s darkness, and it shone with such splendour that that light, which had shed its radiance amidst the darkness, surpassed the day. A very marvellous thing followed as he looked upon this, for (as he himself told it later), the whole world too was brought before his eyes, as if gathered under one ray of the sun’ (Gregory, Dialogues II, 35). Oh to see the world in this way, its vastness, complexity and seeming contradictions embraced by the purifying light of God’s everlasting, redemptive love! St Benedict had long been prepared for this sight; he was ready, now, to enter into the mystery which it represented. This he did shortly afterwards, giving up the ghost with arms raised in prayer, supported by his brethren.

A monk is one who strives to see the world as God sees it. Today this aspiration has become deeply counter-cultural, even within the Church, it has to be said. Full as we are, even in the midst of anxiety, of post-modern confidence that our times represent the acme of human accomplishment, we expect that God’s way of seeing things should adapt itself to ours, not ours to his. It is no surprise, therefore, that so many of our efforts are sterile. We’re like Queen Michal at her window, looking at the presence of God’s Ark in our midst — the sacrament of his presence, the revelation of his will — but not seeing it (2 Sam 6). Michal died cynical and childless. There simply was no spirit in her to be passed on.

May the intercession of St Benedict keep our feet far from this gyrovagous circling of self and show us instead the way of life. It leads outward, onward, upward. It carries us, on wings of trustful obedience, back to our all-wise, all-good Father from whom we stray by presuming we know better. ‘Let the word of Christ dwell in you richly’, Paul urges us. That concerns not least the Gospel word which affirms that we can see God. If we make this our life’s goal, we shall eventually, like St Benedict, see all else, too, in God. Even trials of uncertainty will contribute, then, to a perfect symphony of praise. Amen. 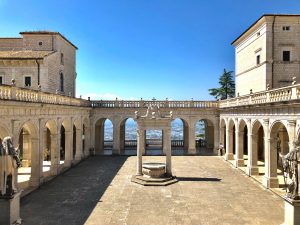