The feast of the Holy Family rounds a hundred years of age this year. It was kept here and there, locally, from the seventeenth century, but it was Pope Benedict XV who made it a feast for the whole Roman Church. That same pope had a notion of the Church as a family. Let me give you an example. On 30 July 1916 he invited the children of Rome to an assembly. It was not a funfair; nor was it something the pope came up with for the children’s sake. No, he called on them as allies in a mighty battle. The First World War had raged for two years. The pope expresses the pain he has known. ‘We’, says he, for those were the days when popes and kings made use of the majestic plural,’We have suffered and besought and prayed for two years, We who are the Father of all the faithful, in whose heart all Our children’s pains and sighs are gathered and resound.’

The thought of a man assuming the taks of being father to the whole Church is beautiful. It is also frightening. Think of the vulnerability of such a man! For what is a father, if not one who freely, consciously takes on the load his children carry? To assist them, he draws back from nothing. He seeks help where help may be found. He explores every avenue. Thus Pope Benedict XV came up with the idea of forming an alliance with children. This is how he explained his purpose:

Until now, Our summons to lay arms down and to seek, by way of reason and justice, a solution apt to end this shameful butchery, have been in vain. Therefore We have resolved, as one would in a shipwreck, to call upon God’s help by means of your innocence. Maybe, We thought, God will […] be moved by a praying sigh that is innocent, and so righteous, like that of His Son, the world’s Redeemer. Maybe, said we, will there be a renewal here, at the foot of this altar, of the miracle ascribed to Hagar’s son, who had wandered in the wilderness, condemned to perish alongside his mother. When Hagar had lost hope, ‘God heard the voice of the child from the place in which he was’ [we read in Genesis 21:17]. Even as an angel then called out to Hagar from heaven, ‘Fear not!’, God will perhaps hear the prayers of these children from this place, before this altar, and bestow on their innocence a message of hope and salvation.

That was the way one talked a hundred years ago. The pope’s rhetorical style can seem difficult. Modern media consultants would doubtless call in unpedagogical and pack the pope off to a communication seminar. That would be to miss the point entirely. For I am certain of this: even if the assembled children, back in 1916, may not have understood every word Benedict XV spoke, they will have grasped – much better than any adult – the exceptional gravity of his concern. They will spontaneously have seen the suffering that drove the very pope, the Church’s Father, to appeal to them for help. And they will have mobilised all the strength of their innocence.

We tend, now, to idealise Catholic family values in sentimental ways. The holy Family is presented as a still life, with Joseph forever levelling a plank, Mary absorbed in meditation, and the Child Jesus hovering devoutly. Perhaps life was like that, now and again, in Nazareth. Who knows? But let’s not make of this most mystical of all families a cartoon. ‘Your heart will be pierced by a sword’, the Mother of God was told by the angel. This is where we find, I suspect, the hermeneutical key to her life and that of her family. Family life is a blessing. It can also be very painful. To stay close to others is risky; to be drawn by blood ties into God’s salvific plan is to become part of a passion narrative. What the holy Family displays is not saccharine harmony but readiness to renounce what is one’s own in order to assume, as a holy obligation, the vocation of another.

That is why I find Benedict XV’s speech to the children refreshingly honest. It is free of nonsense. To be a father hurts, we are told. To be a child is likewise a matter of growing towards carrying load that is shared. The innocent can mediate grace to the guilty. The pope says: the world isn’t as it should be, dear children. People are destroying one another. But there is something we can do, you and I together, by assuming Christian responsibility.

With a mixture of humility and authority, he entrusts a task to the children. He looks at them with reverence and says: ‘A single child, by the splendour of its grace, moves the heart of God.’ Yet how easily life becomes graceless.

It is rare, these days, to encounter such clear speech whether in society or in the Church. A secular prophet like Jordan Peterson is an exception. It is impressive that he, by relentlessly repeating that life is suffering and existence a battle, attracts huge crowds of listeners. What does it say about our Christian account of life that it largely passes unnoticed? Have we not reduced it to something pretty and pastel-tinted, naively affirmative, and really rather dull?

By contrast, the example of the Holy Family is demanding. It calls for clear choices. What does it teach us? That in order to share the life of another one must renounce oneself; that such renunciation is a source of human flourishing and a seed of holiness. ‘No one has greater love’, says Christ our Lord, ‘than he who lays down his life for his friends.’ The principle holds in an even greater degree when it is a matter of sons and daughters, brothers and sisters, fathers and mothers. We receive life as a gift in order to be able to give it. The family is our first and principal school. Joseph and Mary must learn that the Child Jesus does not belong to them; he himself learns what it means to be given over to the Father’s saving purpose. We are called to imitation.

In the monastery I had a luminous old brother, a wonderful man. All day long he prayed, under his breath: ‘Jesus, Mary and Joseph, I give you my heart and my soul. Jesus, Mary and Joseph, assist me in my last agony. Jesus, Mary and Joseph, may I breathe forth my soul in peace with you.’ His prayer was heard. The Holy Family remains a living indication of the fact that fullness of life is reached through trustful, self-effacing oblation. In that area we all still have a lot to learn, whether we are mothers, fathers, or children. Amen. 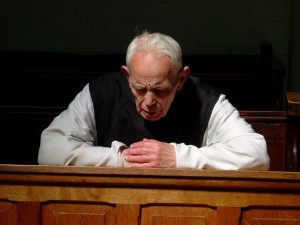 Br Gabriel Manogue (1914-2013), a man of prayer, had given his life once for all and never took anything back. Rarely have I met a man so full of overflowing joy. Fotograf: Br Martin Horwath.